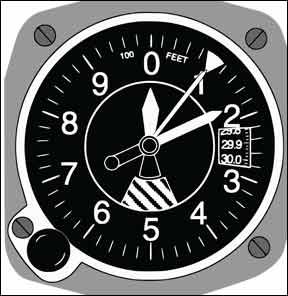 The instruments in our so-called “steam-gauge” panels are marvels of ingenuity. A collection of springs, tubing, gears, bellows, shafts and dials, their basic design predates most of the pilots staring at them. While they have, for the most part, been rendered obsolete by the latest microelectronics and air-data computers, they still work as advertised. Well, pretty much.

errors. Too, they can fall victim to not-so-regular problems, mostly brought about through neglect or damage. The good news is many of these errors are predictable, if we take the time to understand how the instruments work and how the errors may manifest themselves. Perhaps none is more predictable-nor critical for flight safety-as the altimeter.

An altimeter is little more than a barometer with its innards linked to the aircrafts static system. A series of aneroids-essentially hollow, evacuated capsules-expand as the altimeter is taken to altitude and contract when it returns. Of course, thats because atmospheric pressure decreases as we ascend. Along the way, these actions turn all three pointers on the instruments face to indicate the aircrafts altitude. Drum-type altimeters, which generally cost more and usually are installed in high-performance aircraft, work in the same basic ways but lack two of the pointers.

Both include a so-called “Kollsman” window (named after its inventor, Paul Kollsman, and which greatly increases the instruments accuracy), used to input the local altimeter setting, a correction reflecting barometric pressure for the area or airspace (e.g., Class A) in which were flying. The result is a “sensitive” altimeter, one accurate to a few feet, thanks to being corrected for local pressure.

Of course, we must obtain and enter the correct setting into the Kollsman window for the altimeter to accurately display altitude. Getting that correction usually isnt a problem: We either set the altimeter to the fields elevation and note the pressure in the Kollsman window before taking off from non-towered airports or use an ATC-provided setting. Either way, the instrument should read within a few feet of the field elevation when were on the ground. If it doesnt, we may have encountered a mechanical error, as described below.

Checking the displayed pressure against both the indicated altitude and what we know about area weather is a good place to start when verifying the instruments accuracy.

Despite the pressure altimeter being a marvel of mechanical engineering, it is error-prone. Fortunately, we know what many of these errors are and how to compensate for them.

Mechanical error can be caused by normal wear and tear within the instrument, resulting in misalignments among the mechanisms reacting to and transferring the aneroids expansion. As its name implies, this kind of error results from the inherent inaccuracies in any mechanism. This type of error, however, isnt constant or predictable. We check for this error before each flight when we use the barometric scale adjustment knob to input the local setting and compare the altitude indicated.

Scale error is another issue caused by the mechanical nature of the device. In this case, the cause is irregular expansion of the aneroids themselves. Its recorded on a correction card when the instrument is in the shop for work and either retained by the facility or affixed to its case. Either way, the pilot usually doesnt have access to this information.

Installation/position involves the static system itself, the ambient air against which the altimeters aneroids expand or contract. As the aircraft moves through the atmosphere, variations in the airflow past the static ports also causes variations in the displayed altitude. As such, the magnitude of any installation/position error varies with the type of aircraft, its speed and altitude. Some aircraft include a correction card the pilot can use to compensate for this error, and the manufacturers documentation will explain the conditions-different altitudes and airspeeds-under which it must be used.

Reversal error results from large-scale and temporary disruptions to the static pressure system. These changes generally only occur during abrupt and rapid pitch changes and result in momentary indications in the opposite direction. Most aircraft were likely to be flying arent capable of the performance necessary to generate this error.

Hysteresis error is a lag in the instruments altitude indication. Its created by the natural differences in elasticity among the altimeters various internal components and can occur after an aircraft has maintained a constant altitude for an extended period of time. During that time, the components inertia tends to resist movement. Introduce a large-scale altitude change and the altimeter may lag. A typical example results in altimeter readings higher than actual after a rapid descent. This type of error either doesnt exist or is minimal during climbs and slow descents, or after leveling at a new altitude.

Many of these inherent errors can be minimized-or eliminated altogether-by regular instrument maintenance or by installing a new altimeter. At the same time, they may only present themselves in high-performance aircraft. The 24-month altimeter/static system checks required for flying IFR are designed to uncover these errors and either correct or compensate for them.

How much error is acceptable? The FAAs Instrument Flying Handbook, FAA-H-8083-15-1, says if “the indication is off more than 75 feet from the surveyed elevation, the instrument should be referred to a certificated instrument repair station for recalibration.” Thats good advice, and should be followed even when considering an altimeter in a VFR-only aircraft. Remember: Aircraft never intended to be used for IFR are exempt from the pitot/static system checks, although their transponder and encoder still must be checked every 24 months if so equipped.

We all should be familiar with the saying “when flying from a high to a low, look out below.” We probably learned it during our primary training-but certainly should have heard it when going for the instrument rating. The saying highlights the need to obtain a current altimeter setting-perhaps very often if flying a faster airplane through a front, when the pressure gradient changes abruptly over a short distance.

Specifically, an aircraft flying from a high-pressure area to one with lower pressure will be at a lower altitude than intended if the altimeter is not reset to the local, current reading. Again, this error is one of which all instrument-rated pilots should be aware, but also sometimes gets lost in the busy cockpit environment. See the sidebar at left for examples of how altimeter-setting mistakes and pressure changes can wreak havoc, even among professional flight crews.

These errors, whether temperature or pressure-related, all can be traced to changes in air density when we move from one area to another. Think of it this way: The altitude an altimeter indicates measures how much the air above it weighs. As the aircraft climbs, the amount of air above is reduced; so is the weight of that air. The immediate result, of course, is an indication youre climbing. At the same time, presume the air is unusually cold and, therefore is denser than normal. As you climb, weight of the air above the altimeter is reduced at a faster-than-normal rate. One result is a greater-than-actual rate of climb.

Another way to look at it is the atmosphere has a constant weight. With that in mind, the greater the weight of the air below you-cold air, or air under high pressure-the less the air above you will weigh. When denser, colder air is below us, the altimeter will think its higher than it actually is because it senses less-dense air above it, pressing down. The result is the altimeter will be lying to us once again, and well be lower than we think. And thats bad.

Any discussion of altimeter errors would be incomplete without quickly highlighting the different types of altitudes recognized, along with their definitions.

Indicated altitude is the value displayed on the pressure altimeter.

Pressure altitude refers to the height of the aircraft above a standard datum. We use the ISA-standard atmosphere-59 deg. F/15 deg. C and 29.92 in Hg for this reference and compare the results when temperature and pressure differ, as they usually do. If we didnt have the ISA-standard atmosphere, extreme temperature and pressure differences would create substantial errors in both altimeters and other instruments depending on static pressure.

Density altitude is pressure altitude corrected for temperature. This calculation converts the airs density to the standard atmospheric altitude having the same density and, of course, is used in performance and true-airspeed calculations.

Absolute altitude is the height above terrain computed by subtracting terrain elevation from true altitude.

The vast majority of the time, altimetry errors are small in scope, manageable and well within the tolerances built into the ATC and IFR systems. If, when performing the preflight checklist, an altimeter indicates an error greater than 75 feet, it should be inspected and/or replaced before attempting IFR flight.

Once were aloft, extremes of pressure and/or temperature can generate their own kinds of errors, but even minor changes in these variables can result in being a few feet high or low. That said, and as the sidebar on the opposite page highlights, many altimeter errors are caused by humans either forgetting to input a correct setting or failing to do it properly. When contemplating IFR operations and the need for accurately measuring our distance from obstacles and other aircraft, its wise to ensure we have the correct settings. Take care of your altimeter, and your altimeter will take care of you.