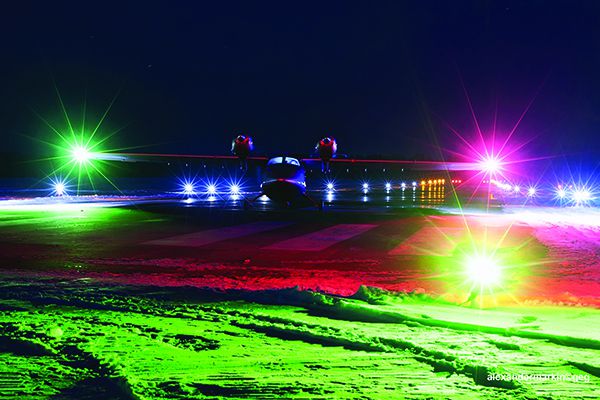 Aviation presents ongoing and ever-changing hazards that must be considered at all times. Often overlooked is the airport ramp and the non-movement area. This is especially important at night when personal/commercial vehicles have access.

This came together a recent, adrenaline-pumping scene I witnessed on the ramp at the North Las Vegas, Nev., airport waiting for my flight instructor, a 23-year-old CFII, and his student, a seasoned airline captain adding on his own double-I. Nighttime at North Las Vegas presents a sea of blinking red, white and yellow lights with rows of aircraft and shelter hangars mixed with impulsive, often erratic vehicle movement. The ramp area where I stood that night was well-lit and enhanced by a bright, full moon, so there was no lack of illumination.

I could see the aircraft’s blinking beacon and glow of navigation lights in the distance as they taxied on the non-movement ramp toward the tiedown area with the landing light off. As the aircraft rounded the last turn and continued behind a line of aircraft to a parking area, a vehicle entered the gate and proceeded at high speed across the non-movement ramp between aircraft at a 90-degree angle to the taxiing aircraft.

In a subsequent conversation, the driver thought it was his flight school aircraft returning and assumed it would be turning left. He “lost sight” of the tail beacon in the background of blinking red lights. When the pilots were asked why the landing/taxi light was not on, the CFII replied, “I didn’t want to blind anyone.”

The takeaway is vigilance and common sense. We are taught to be aware of our environment. At night, we try to avoid blinding others with landing lights, taxi lights and strobes. Does this mean we taxi on a non-movement ramp void of other moving aircraft with lights off for fear of “blinding” someone? Had the landing light been on, the driver would have had an enhanced opportunity to spot and know where the aircraft was. Had the landing light been on, it would have projected down the taxiway, giving the driver another opportunity to see the aircraft. See and be seen!

Have you encountered a situation or hazardous condition that yielded lessons on how to better manage the risks involved in flying? Do you have an experience to share with Aviation Safety’s readers about an occasion that taught you something significant about ways to conduct safer flight operations? If so, we want to hear about it.

We encourage you to submit a brief (500 words) write-up of your Learning Experience to Aviation Safety for possible publication. Each month, Aviation Safety publishes a collection of similar experiences sent to us by readers. Sharing with others the benefit of your experience and the lessons you learned can be an invaluable aid to other pilots.

You can send your account directly to the editor by e-mailing it to avsafetymag@gmail.com. Put “Learning Experience Submission” in the subject line; add your name and daytime telephone number at the bottom of the e-mail.

Your report will be considered for publication in the Aviation Safety’s readers’ forum, “Learning Experiences,” and may be edited for style and length. Anonymity is guaranteed if you want it. No one but Aviation Safety’s editor is permitted access to the reports. Your name and telephone number are requested only so that the editor can contact you, if necessary.

While we can’t guarantee your submission will get published, we can guarantee that we’ll closely review and consider using it.

All Learning Experience submissions become the property of Aviation Safety and may be republished.