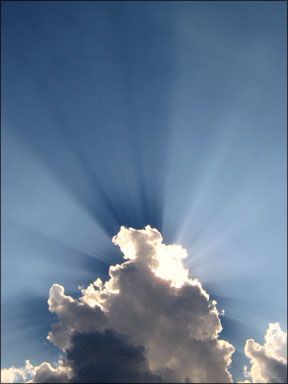 As an aeronautical engineer, I knew the theoretical stuff about flying. But as a student pilot, I found that theory and practice need some correlation to have real meaning. For example, I knew about sailplanes using updrafts associated with cumulus clouds to gain altitude. But I hadnt correlated that knowledge to the real world.

One day, I was flying from Buffalo, N.Y., to Cleveland, Ohio, in an Aeronca Champ. Along the route were cumulus clouds with bases at about 5000 feet and tops at about 8000 feet. The clouds were a couple of miles in diameter and formed a long street along my route. I decided to save on fuel by using the clouds to “glide” along my route.

Entering the space under a cloud at about 1200 feet agl, I pulled the throttle back to idle. Sure enough, the altimeter wound up and I circled until I was at about 4500 feet. Turning towards the next cloud along my path, I kept the throttle at idle and glided. By the time I was under the next cloud, I had descended to a bit less than 2000 feet. This went on for several clouds.

But I decided that this was no way to save fuel. The circling to gain altitude and the headwind made my effective groundspeed so low that the net fuel saving, if any, was not worth the delay.

Some time later I was on my way from Buffalo to Dayton, Ohio, over pretty much the same route. This time I was flying a Piper Super Cruiser. As I passed south of Cleveland, on my right was a large cumulonimbus cloud pouring rain down on Cleveland. I could see the dark, flat, cylindrical bottom with gray rain hanging under it. Stretching out from above the stormy center was a large, white shelf extending over my path. The shelf ended with a sharp edge tapering up to the main thunderhead.

I flew under this shelf as I passed south of Cleveland. The flat bottom seemed to be getting lower and lower. But a glance at my instruments informed me that this was an “optical illusion.” The clouds werent getting lower; my airplane was getting higher. In fact, the rate-of-climb indicator was pegged at 2000 fpm! Now

this was an updraft!

I throttled back to idle and pushed the stick forward until the airspeed approached the red line. The rate-of-climb indicator refused to go negative! So I turned left 45 degrees to try to get out from under the shelf. I should have made a 90-degree turn.

As the left wing emerged from under the edge of the cloud, I suddenly found myself in a 90-degree left bank. It took what seemed like a millisecond. The right door flew open and my camera slid across the floor to the door sill and hit it with a bang. Fortunately, the sill kept the camera from leaving the airplane.

And thats how I learned the practical difference between a fair-weather cumulus and a storm cloud.