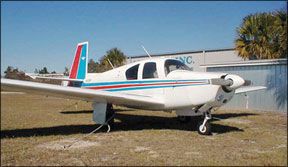 As a kid, I was obsessed with flying: I rode my Schwinn Stingray to the John Wayne/Orange County Airport (SNA) every day after school to “hang out” near the bulletin board at the north tiedowns. I would wash planes for the

chance of a ride. It was a different world then: no security fencing, no paranoia, just camaraderie and fun. To no ones great surprise, I earned my Private as soon as the law allowed.

While attending the University of California at Irvine, I often walked the tiedown area looking for under-utilized planes. Finding one, I would contact its owner, offering to buy it. I acquired a 1959 Tri Pacer, two 172s and three Mooneys that way. I could put 20-25 hours on a plane, sell it, and make $2500.

One of my Mooneys, a 1965 Super 21, suffered a vacuum pump failure. As I was still in college, finances and time were a real issue. So, I decided to “install” my own replacement vacuum pump-how hard could it be, right? In addition to the illegality, I didnt have the tools necessary to properly torque the mounting nuts. In retrospect, that task admittedly was not my finest hour. But-what the heck-the pump ended up attached to the engine and turned the gyros.

Once my “repair” was complete, I departed SNA for my daily jaunt down to Oceanside Airport (OKB) near San Diego. About halfway down the coast, I noted oil on the windshield. This was accompanied by dropping oil pressure and increasing oil temperature. Not good.

“Okay,” I said to myself, as trained, “do not panic. Analyze, assess options and react accordingly.” As my hero Bob Hoover would say, “Its time to engage the brain, not the adrenal gland.” I advised approach I had a problem, changed to 121.5 MHz and squawked 7700. Zero assistance was rendered.

The nearest airport was San Juan Capistrano, a very small field, but it looked like the reef runway at Honolulu at that time.

Since I couldnt afford to “zero-time” the 200-hp Lycoming at that stage of my life, I bled back power to a minimum, made a safe landing and, after the obligatory “kiss the ground” ceremony, pulled the cowling. As you may imagine, there was no sinister culprit responsible, merely my failure to properly torque the vacuum pump nuts. They had backed off slightly, causing an oil leak. To save maybe $50, I almost bought the proverbial farm.

To this day, I am surprised no one ever came to the airport or contacted me about the incident. I assumed going to 121.5/7700 would at least elicit an FAA letter, but nothing. Again, those were different days.

I now own a P-210 and let the pros do virtually all maintenance except cosmetic repairs. Its a lot more expensive, but Im still around to write about it, 35 years later.