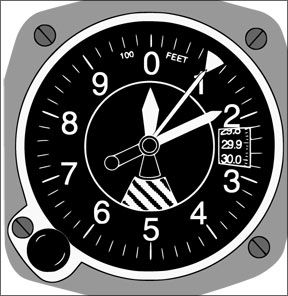 Expectations can force the eye to see what the mind wont parse. My lesson in this human frailty occurred when I was taking an end-state instrument student out into some real weather, which he had been pestering me do for weeks.

The trip was a short one, from a central Connecticut airport, across Long Island Sound to Islip, then Westhampton Beach and back home again. A nice easy 90 minutes with four or five approaches. The weather was horrid, but perfect for IFR training. A late-winter warm front had moved in over the still snow-covered ground

to produce uniform ceilings of 300 to 500 feet in a couple of miles of viz. Tops were widely reported at 3000 feet and since Id seen these exact conditions before, I knew what to expect.

Link one: The lesson was a rushed after-work affair and I was pushing to get it done before full dark. I dont mind night IFR, but not in a Cherokee with no backup vacuum, thanks. We slammed together a briefing, filed a flight plan, got into the airplane and picked up a clearance while the engine warmed.

Link two: The Mode-C had been flagged intermittent but, as is often the case, the avionics shop couldnt track it down so the airplane went back on the line. In those days, flying with a questionable Mode C wasnt the mortal sin that it has become today.

Link five: Because my student was all sweaty-lipped about his first venture into low IMC, I blew off the internal time-clock cues telling me we seemed to arrive at 3000 feet awfully quickly and (six) I made a note to do a PIREPS on the tops, which were clearly much higher than 3000 feet. Those 32 other PIREPS must have been wrong.

Link seven: When approach couldnt tag up the radar as we reached 3000 feet-like they always had-I assumed it was the Mode C acting up again. And, lets see-Im running out of fingers here-link eight had to do with being over Long Island Sound and having the controller question the 2000-foot Mode C trace. Twice.

The chain finally snapped when we actually checked the altimeter setting. It was a full inch too high. Only by the good graces of coastal geography and the lack of a nice site for a 1700-foot radio television tower had we avoided becoming an NTSB footnote asking, “What were these guys thinking?”

What about the checklist, you ask? However good or bad a written checklist is, it does nothing for the human tendency toward confirmation bias-if you see what you expect to see, you see it and move on. Both my student and I saw the big needle on the 727-foot field elevation and that was good enough. Checklists, habitual careful double checking and a sixth sense for survival are all terrific. But sometimes, its just better to be lucky.