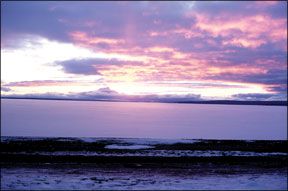 It was a mid-winter afternoon in southeast Alaska. We were having one of those beautiful CAVU days, with the temperature warming into the lower 20s. It had been cold for three weeks and the lakes were completely frozen.

I asked my non-pilot friend Greg if he would like to take “the little plane” and land on the lakes with me. I fly an Experimental homebuilt, which fits into the LSA category. It has tundra tires, which makes it ideal for beaches or frozen lakes with

little or no snow.

The first lake was only a few minutes away. We flew over it at low altitude to check the surface. It looked fine, so we did a left 360 and set up for the landing. We touched down, finding the frozen lake surface as smooth as glass. Power in, pull back and we were off to the next lake.

The next two lakes were the same as the first, but my landings were not as smooth. The fourth lake was higher still and much smaller. I had landed here before, but not this year. We did our low pass. It looked good, but it was a little bumpy. The approach was tight, with little room for error. We made base and then turned final. Greg said, “This is going to be the smoothest yet.”

Just as he said it, we flew behind the mountain shadow. A moment earlier, I could easily see the lakes surface; a second later not so much. As fast as I could think “flat light,” our wheels found the ice. We hit hard. So hard Gregs headset came off and landed in his lap. I shut down and we coasted to a stop. Greg went glanced outside at the landing gear. “This axle is bent,” he said. “It looks like about a 20-degree bend.”

We both climbed out and looked over the plane. Everything was okay except both main gear axles were bent badly enough the tires were almost rubbing the landing gear. I turned to Greg in a semi-serious voice and said, “Well, Mr. Survivalist, now what?” He promptly responded, “Well, at least you had the decency to crash the plane on a lake with a cabin on it.” I turned around to see a state forestry cabin just mile away.

We found planks at the cabin and were able to bend the axles so the tires were not rubbing on the gear. After talking, we decided to try to take off and fly the 30 miles back to town. The plan was to take off and see if the wheels stayed with us. If they did, fine. If they didnt, we would land on a frozen float pond close to the airport.

As we lifted off, almost afraid to look, I checked my side and the wheel was still there; Gregs side also. The flight home was quiet. As we flew the approach, I told Greg, “This will be one of the smoothest landings you have ever been a witness to.” It was.

After the plane was back in its hangar, we both agreed we encountered flat light, plus we had a tailwind when we landed-two things neither of us want to face at the same time again.