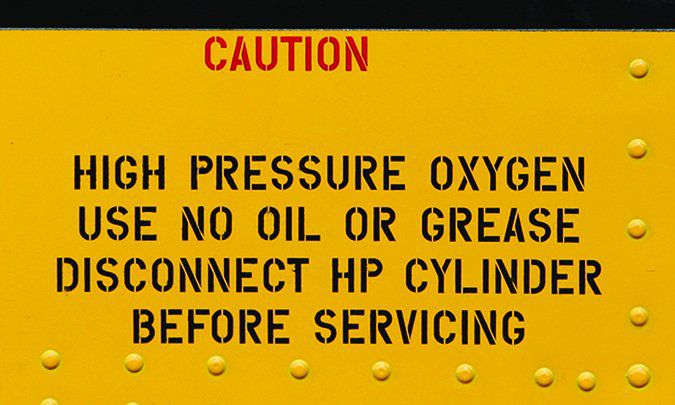 Several years ago, I made plans for one of my frequent weekend trips in my Beechcraft B36TC Bonanza from the Texas Panhandle to visit friends in California. My usual plan was to stop for fuel in Page, Ariz., on both legs. However, with a helpful jet stream, and the turbocharged Bonanza’s ability to cruise in the flight levels, I often made the trip home non-stop.

This particular Friday, work delayed my departure. When I finally arrived at the airport, the plane was ready but the onboard oxygen cylinder was not fully pressurized. I didn’t want to get an even later start by waiting for a refill and my backup portable oxygen tank had been filled the day before. So I took off, arriving for a late dinner with friends.

The Sunday forecast called for clear skies all the way home, with a 90-knot tailwind at FL230. I slipped on my re-breather mask just after takeoff, checked the pressure in the oxygen cylinder and reminded myself I probably would need to switch over to my backup tank during the flight.

Down the road, an ATC sector’s radar was down for maintenance and I was assigned a position report. Flipping to the en route chart page, I couldn’t seem to find the VOR frequency or the correct intersection. I remember thinking, “Why is this so hard to figure out?” Suddenly what was left of the light bulb in my head went off. I checked the onboard oxygen cylinder pressure gauge reading: zero. No wonder my lips were starting to tingle and I couldn’t complete a simple mental task! It was time to change to the emergency oxygen tank.

Reaching behind the co-pilot seat, I pulled out the carrying case and realized I had the tank in one hand and the unattached regulator in the other hand. Each unsuccessful attempt to manually attach the regulator sleeve to the tank was met by the hiss of escaping oxygen. I finally realized two things: the sleeve nut could only be attached with a wrench I didn’t have and that I was rapidly losing whatever capability remained in my oxygen-starved brain.

I knew that I had to get down, and fast. Vaguely remembering the emergency descent procedure, I pushed the nose over, pulled the throttle, dropped the gear and controlled pitch to keep airspeed below the yellow arc. I managed to notify ATC, who cleared me to descend. Finally, the fog in my mind started lifting and when I leveled off at 8000 feet I was aware enough to understand how close I had come to disaster. I landed in Farmington, N.M., to recover and returned home the next day with a full on-board oxygen cylinder and backup tank with regulator attached.

There were many lessons: A full oxygen cylinder is better than an early start; failing to inspect the status of my back-up oxygen system was almost fatal. High-altitude operations should still require hypoxia training. Pulse oximeters are inexpensive and easy to use, but I owe my life to the instructor who insisted I remove my oxygen mask at altitude to know how it feels.