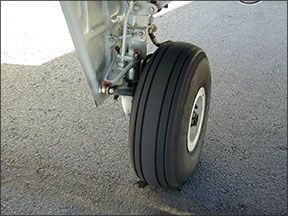 Aww, crap,” I thought as I realized my Baron’s right brake went all the way to the floor. Some vigorous pumping returned some of its pressure, and it was usable for low-speed taxiing, but not for much else.

The soft brake resulted from recently replacing all the airplane’s tires and tubes, work my mechanic and I had completed a few days earlier. He had noticed some brake fluid leaking from the right caliper; it so happened I had the proper O-rings in stock, so we replaced them and bled the brakes. We didn’t test-fly or -taxi it that evening, though, as it was getting late and the beer was getting warm.

Now, I was taxiing via the narrow and circuitous route to the runway, pumping up the right brake when I needed to make a sharp turn. My solo mission was a 1000-nm trip, the start of my summer vacation. My mechanic was MIA and it was too early in the day for the on-field maintenance shop to help. What to do?

My planned fuel and lunch stop had a single runway; the forecast was for benign winds upon my arrival. But you never know. Waiting around for the local shop to open would put me way behind schedule for lunch with my friend, and put me at my destination much later than I wanted.

“It’ll be fine,” I told myself, as I added power and took off, heading north. The flight was uneventful, as was the landing, and I didn’t need hard braking. But the right brake had gotten softer. I needed to get this resolved before another takeoff.

The mechanic at my fuel/lunch stop was nowhere to be found. I described my problem to my friend, who then started scrounging tubing and 5606 fluid to bleed the brake. After a couple of tries we got it right; better than the left one, in fact. After bidding farewell and another uneventful flight, I made it to my vacation destination, on time and without a problem.

But it wasn’t fine; not really. None of us should ever take off with a known deficiency. I got away with it this time, only because the weather was good. There won’t be a next time. — Steven Keith