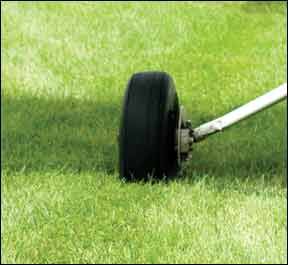 An aspiring pilot hanging out with other pilots will, from time to time, find him or herself riding shotgun with another, similarly afflicted individual. This is as it should be, since misery loves company. Since the person in the left seat for these flights often has more hours and experience than us, well often defer in-flight decisions or

fail to speak up when we notice something amiss. Thats the wrong reaction.

My first learning experience as a right-seater came shortly after earning my private. Suddenly, I was a senior member of the local Civil Air Patrol (CAP) composite squadron and there was a for-real search-and-rescue mission on. No one was available to fly the 172, but I wasnt a command pilot and couldnt be PIC for the mission. After picking up a command-rated pilot at a nearby field, we flew a sortie and he then decided to drop into an unfamiliar airport for fuel.

His approach was high and hot and, sure enough, we rolled off the far end of the paved runway into the weeds before he could stop. Thankfully, there was no damage, and we were able to use the airplane again.

A few years later, I found myself in the right seat of a 152 with an experienced instructor. As our playtime neared its end, a shower moved in, threatening to block access to the 152s base. The CFI took the controls and aimed for the field. Again, we were high and hot but, unlike the first time, this was a grass strip. And the shower we were trying to evade had already visited, leaving behind standing water.

The outcome was predictable: Touching down beyond the grass strips mid-point, the CFI locked the brakes and we sluiced our way through standing water, coming to a stop too close to a barbed-wire fence. The wing swung over the fence as we turned around.

These experiences, among others, have taught me to speak up more often from the right seat. Even if the left-seater has done this longer than me, its always a good idea to have a second opinion. That goes for when Im in the left seat and another pilot is riding shotgun. It should go for you, too.