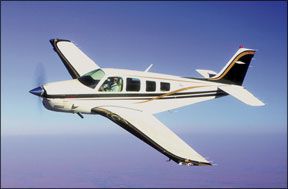 Just a few weeks after I received my Private certificate, I was using a C172 for pattern work at my home airport, just north of Detroits Class B. As I reported on the downwind leg, I heard a Bonanza reporting two miles west. “Okay,” I thought, “Ill be on base shortly; hell be number two behind me.” Reporting base, and declaring myself “number one” for the runway, I was not too surprised to hear the Bonanza pilot report downwind behind me. He did not, however, declare himself as “number two,” acknowledging someone was ahead of him. I proceeded with my turn and reported on final for Runway 36.

As I turned to final, and reported “number one for 36,” I heard the Bonanza make his final call: “Bonanza on half-mile final for 36.” I was approximately 200-250 feet agl and close to the threshold of the runway when seemingly out of nowhere the Bonanza overflew me. I watched in astonishment as he landed long, perhaps close to the runways mid-point.

After a go-around and uneventful pattern, I landed and parked the rented airplane on the ramp. In the FBO, one employee was rather excited about what he had just seen, and heard, on the radio. Another pilot asked me, “Did that guy just bounce in over the top of you? He landed pretty hot!”

At this point, what had almost happened began to sink in. As I was turning in my keys and clipboard, and paying my bill, the Bonanza pilot came in to request fuel.

He didnt want to look at me, and as he signed in, he said, “Uh, no…I didnt. Sorry, I dont usually do that sort of thing.” He knew he had not seen me; whether he heard me, I would never know. Because I was a new pilot, and about 25 years the Bonanza pilots junior, I was reluctant to make a big deal out of it.

Driving home from the airport, I got a chill as I realized how close we had both come to a mid-air. With my high wing, I couldnt see above me; his low wing blocked me from his view. I have no idea how close the Bonanza actually was in those few moments on final. No one on the ground really got a good look at us either.

Now, whenever I am in the pattern, I make sure to inquire directly of other pilots as to whether or not they have a visual on me and to confirm exactly where they are if I have any doubt whatsoever. Alternately, if and when Im a pattern with a student pilot, or someone who isnt “with it,” Ill depart the pattern, announcing my intentions to circle away from the airport and give the other traffic time to land, leave or get out of the way.

I am consistently amazed to find that pilots of other aircraft still do things (e.g., begin their takeoff roll while Im on short final, necessitating yet another go-around) that clearly indicate that they are not paying attention to whats going on around them.