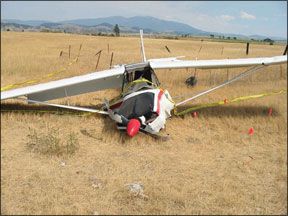 I bought my first airplane from the local Civil Air Patrol (CAP) squadron commander. I got a good deal, with one condition I thought was a privilege: I was to join the CAP and take part in their exercises and other duties. Soon enough, I was called out on an actual search and rescue mission.

The previous day, four students at a local college left Buffalo, N.Y., flying south to near the Pennsylvania border where they were to drop leaflets on the rival college they were scheduled to play Saturday. The weather had been marginal with low

clouds and snow flurries down the valley connecting the campuses. The airplane never returned.

We found the wreckage on the far side of the ridge to the east of the valley. There were no survivors. Friends of the pilot, a freshman, were surprised because he was known to be a safe, careful pilot who would never intentionally fly into bad weather. The other airplane occupants were upperclassmen with no piloting experience. The mystery was why the pilot allowed himself to get into that position. It wasnt until some time later that I almost certainly figured it out.

I flew frequently between Buffalo, where I worked, to New York, where I had a social life. On most of these flights I carried a passenger who was happy to buy the fuel.

The route was familiar, with several places to land if the weather turned unfavorable. On three occasions, I had to take advantage of these emergency stops. On each occasion I had vociferous arguments from my passenger about not completing the flight as planned. But being the pilot-in-command, I overruled his arguments while explaining the reasons for my decision.

These experiences convinced me the upperclassmen cowed the freshman into continuing the flight against his better judgment. I had my own weather limitations, gradually loosening them as I gained experience. I was especially careful about this when I had passengers. One day, I learned my real weather lesson.

I was flying solo from New York to a resort near Lake George. The destination weather was VFR but the Hudson Valley was marginal with low clouds and intermittent rain. I was solo, so I decided to try the trip. About a third of the way, the clouds thickened and visibility dropped-there was solid rain ahead.

But the “get-there-it is” made me go a little further until I finally decided to land. I saw a nearby airport along the Hudson on the chart. But by then, the light was so bad that I couldnt find it in the dark.

Fortunately, there was an open field on top of the Palisades where the light and visibility were still good. I made my first and only off-airport landing. The next day, I had only a minor problem taking off and continuing to my destination.

The lesson? Dont push minima even if youre alone in the airplane. And especially dont let passengers push them for you.