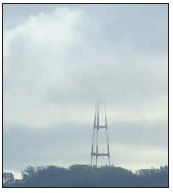 In February 2009, I flew from my home base at the non-towered airport (X04) in Apopka, Fla., to Kissimmee, Fla. (ISM), to meet some friends and then head off to a nearby airport nearby for lunch. This is something we have done pretty much every Friday for years with the same bunch of guys. This day started out as every Friday had for years but didn’t end that way.

When I landed at ISM, I taxied to my friends’ hangars and then hopped aboard one of their aircraft. We head to Sebring, Fla., (SEF) for a great lunch. After lunch, as we flew north back to ISM, I noticed the weather was deteriorating. Initially, I was not concerned as the forecast was for a cold front to come in from the west much later that day. I soon realized that Mother Nature had a different idea.

We landed at ISM with ceilings down to 1700 feet agl. I quickly hopped in my plane for the short, 26-nm trip back to X04. By the time I taxied to the run-up area, ceilings were down to 1200 feet. I still felt the short distance shouldn’t be a problem. Shortly after launching, I discovered I could not climb above 1000 feet due to the cloud cover, but pressed on. Halfway there, I was down to 800 feet. I was within 10 miles of home, though, so I figured I still could get in.

Suddenly, I had to descend to stay out of IMC but could not. When I looked at my GPS, the terrain alert was flashing bright red almost over the entire screen. All I could do was apply full power, pull up and turn one way or the other blindly, hoping for the best. The nearby obstacle turned out to be a 1400-foot-high communications tower.

After getting clear of that tower and going in and out of the clag, I was only a few miles from X04, so I thought I could see if I could get in. I made one pass near the airport and realized the broken layer was at 300 feet. I also realized what I was doing was absolutely crazy.

I finally performed the 180-degree turn and climbed into the clouds, leveling at 1500 feet, and headed back to ISM. The only saving grace here was that I had spent 1.5 hours in the clag with an instrument instructor some years earlier but never completed the course.

I didn’t break out at ISM until I was five miles away. The tower cleared me to land and I taxied back to my buddies’ hangar; one of them drove me back to my home near X04. I was shaking for a good part of that trip back. On the drive home from the airport, I was within a mile of my house and looked up to notice that same communication tower I had almost flown into. I shuddered when I realized I almost died less than a mile from my own home.

The reminder is daily now: When I leave my home, I see that tower and it reinforces what I did was absolutely nuts and has forever changed my respect for weather.