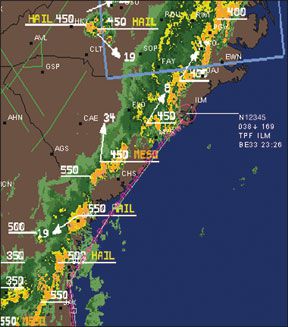 The day’s mission was to attend a family reunion in Florida, then get back to my home ‘drome in the mid-Atlantic. I had work the next day and my kids had plans. It was summertime, so thunderstorms were a concern, even if that day’s weather wasn’t too bad. The reunion concluded, the kids and I got to the airport, launching into good VMC, and began working our way across Florida and up the Atlantic seaboard.

Before launching, I checked weather and studied a cold front and line of thunderstorms basically extending from Canada to Cuba. There weren’t many gaps in it, if any, and Flight Service hinted a lot of airliners were diverting or cancelling because of it.

After getting to altitude and settling in, I started querying ATC about gaps and holes in the line and where other flights were getting through. The news wasn’t encouraging: Basically, no one was poking through that stuff. I was on the front side in severe clear. But I eventually need to get to the backside, where my destination was just starting to dry out from the storm’s passage.

Thinking there’s simply no way a system could literally not have any gaps in it, I kept trucking along at 11,000 feet and chatting with ATC and Flight Service about what they were seeing. The storm basically paralleled the eastern U.S. coast and was moving east at 25-30 knots. I was scooting up that same coast at 165 knots, but I didn’t have the gas to go to Canada or Bermuda, which began to appear as the only real options. Thankfully, ATC worked closely with me on updates, including some on-the-fly rerouting and destination changes from Savannah to Charleston and on to Wilmington.

About halfway between Charleston and Wilmington, it became clear  this wasn’t going to work much longer. Wasting no time, I told ATC we’d land at Wilmington, and that’s what we did, with the storms close enough to make the arrival a choppy one. We quickly taxied in and shut down, securing the airplane and making it to the FBO just as the first drops of rain started to fall.

Driving away in our rental car in search of dinner, we had to pull over to wait out some heavy rain. Two hours later, the sun was setting in a clearing sky, but I just wasn’t up to flying the rest of the way home. The kids and I had a great time in a cheap hotel, and motored home first thing the next morning. The moral? Always have an out when dealing with thunderstorms, and don’t overfly it.