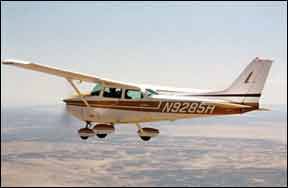 My Learning Experience has almost nothing to do with a near-death event and everything to do with knowing the FARs and understanding how they often can be used to our advantage when the chips are down.

I was helping close friends who were preparing to ferry their cherry 172 from the east coast to their new home on the west one. Owing to their move, the airplane had been sitting for a few months, and needed some attention before it could be flown. The shop had taken its time, resulting in the airplane finally being ready the

afternoon before their scheduled departure. I volunteered to do the post-maintenance check flight from the towered airport.

Alas, the weather wasnt cooperating. Visibility was around four miles, but the ceiling was down to 800 feet or so. Lots of VFR-only pilots were moping around the FBO lounge, waiting for things to pick up before their airplane-rental reservations expired. But I had an instrument rating, was current, and the airplane was properly equipped and certified. So, I grabbed my gear and headed for the airplane. After starting up, I called the tower and was reminded the field was IFR. They didnt have a flight plan on file for me.

I taxied out and spent an hour or so doing touch and goes. The airplane performed perfectly, and my friends were able to leave the next day on their ferry flight.

Later, I learned at least one pilot was mad the tower let me shoot touch and goes when he couldnt. He even called the tower to ask why I got “special” treatment. Someone clued him in: You have to ask for a special VFR clearance; ATC doesnt just hand them out like candy.

The point is the FARs contain a lot of large print about things we cant do, but theres some small print there, too, that often works to our benefit under many circumstances. Those circumstances include the right training and the right airplane, plus the knowledge and experience to ask the right question at the right time.