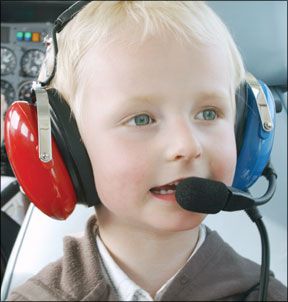 Several years ago, on a beautiful clear and crisp Missouri morning, an opportunity arose for me to fulfill my seven-year-old sons desire to go flying with me. I was hoping to share with him my passion for flying. Instead, what I got was a

We were in a Piper Archer II. My son wanted to sit in back, which I felt was the safest place for him considering his age and height. During the pre-flight checks, everything went as advertised, including the a check of the controls for movement freedom. As we taxied out, he mentioned something “tickling” his posterior. Hearing that comment, I presumed he was sensing engine vibrations transferred through the fuselage.

Taking the runway, I advanced the throttle, only to hear my son again say, “Dad, my butt is tickling again.” Again I minimized his sensation to engine vibration. Just as we lifted off, he spoke up a little louder with, “Somethings really tickling me, and is moving under my seat!” That got my attention!

I had two problems. One of them, hadnt figured out yet. The second one was we were out of sufficient runway land. I monitored the engine instruments on a straight-ahead climbout. Everything was normal-until I tried to make a clearing turn upon levelling at 3500 feet. I couldnt!

Fear paid a little visit about that time as I realized I had no aileron input whatsoever; none, zilch. Whatever the mystery movement under my sons seat, it was the direct cause of our little dilemma.

Using the rudder, along with power and pitch control, I slowly managed to turn the Archer around and position us on a long final, successfully landing without further drama. After exiting the runway and stopping, I climbed out, got my son out and began the investigation.

The aileron cables are located under the Archers rear seat, covered by a carpeted kick-panel. Under that panel are access holes, with covers. At least the covers are supposed to be installed. Instead, they were missing, and the carpet was worn through in one spot. Behind that area was a six-inch hole, with no inspection panel over it. Peering into the hole, I immediately found the culprit: Someone thought it would be a brilliant idea to stuff rags into the inspection hole rather than replace the panel. On takeoff, those rags fell down into the fuselage, wrapping themselves around the aileron cables and jamming into the pulley and bracket. This totally restricted any aileron movement!

Other than divine intervention, I still dont know what was tickling my sons seat. The lesson I learned was, “Get to know your aircraft very well, especially a club-owned aircraft, to ensure very thorough inspections are performed. And dont ignore that small voice trying to get your attention.”