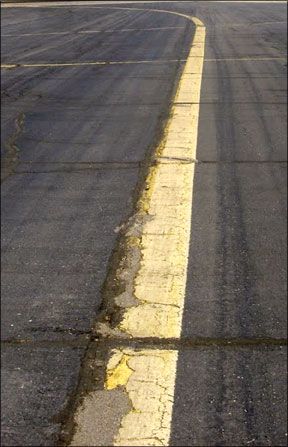 I had flown my experimental airplane from California to Kansas to attend a plane-builders reunion. I departed early in the morning, after drinking a lot of coffee. Soon, it needed relief.

I tried everything to ease the pressure but after two hours, I had to land pronto. I

used the NRST button on the Garmin and found my way to Pratt, Kan. The landing was uneventful.

As I taxied in, I saw a sign for the FBO, which seemed to point across the taxiway I was on. Nature was insistent, so I rationalized it must be across some old concrete pavement where a B-29 hangar still stood. At the time, it didnt register that the FBO would normally be found by staying on the yellow line if I just continued taxiing. I started to pull off the taxiway and immediately the plane began shaking violently-I just had a prop strike.

Forgetting about the relief issue, I jumped out to see that the maple propeller that carried me across half the U.S. was demolished into slivers and a blue taxiway light was broken. I felt so stupid because Im supposed to know better at my age and experience.

I dragged the plane to the FBO where Midwest hospitality and kindness soothed my dumb mistake. They put my plane in a hangar, loaned me a courtesy car, called a motel and allowed me to use their tools. A friend in Tennessee volunteered to send a spare prop which got me going again.

While waiting for the prop, I checked the prop flange for wobble and run-out; all was good. The wooden prop had absorbed the impact energy, destroying itself and saving the engine from damage. When the prop arrived, I bolted it on, flight-tested it and found all was well. After that bit of drama, I resumed my flight home, the rest of which was uneventful.

The lessons here? Yellow lines are intended to be followed closely and deviations from them leads to trouble. Having a relief bottle in the plane or landing long before things get too uncomfortable to affect good judgment helps, too.