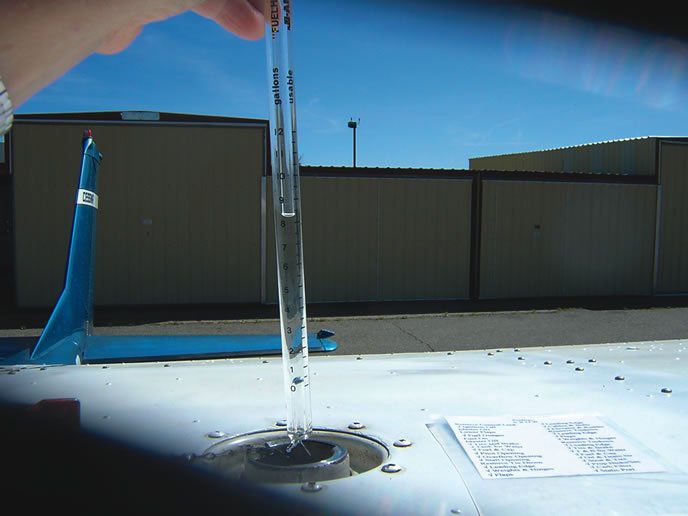 I was flying my Cessna T210 Turbo Centurion from White Plains, N.Y. (KHPN), to Atlantas Dekalb-Peachtree Airport (KPDK). Thanks to a supplementary tank, I had enough fuel to make the flight with an hour’s reserve. Before takeoff, I had watched the line crew fill the fuel tanks to overflowing.

I departed IFR, climbed to 16,000 feet and had an uneventful leg. About 50 nm north of Asheville, N.C., the pitch-black, moonless night became VMC, so I cancelled IFR1 and descended to 14,500 feet. Over Asheville, first one then the other fuel gauge dropped to zero. This had happened before, and correcting it required unzipping the headliner and wiggling the wires. The plane was due for its annual inspection, and the issue was to be corrected then2.

This time, wiggling the wires didn’t work. I obtained the total fuel burn from the just-installed Shadin totalizer and compared it to the fuel supply: there should be an hours fuel remaining. I decided to land for fuel, but being at 14,500 feet concluded it would be a waste to spiral down to Asheville, so I decided to continue to Toccoa, Ga.3

After descending to 5000 feet and turning a five-mile final, the engine quit. I hoped I could glide to the runway4, but once I down to what I thought was about 1000 feet agl, I saw tree tops-remember, it was a pitch black night-close below. I maintained best glide speed until entering the trees, then I deliberately stalled the airplane, coming to rest in a cradle of branches 10 feet agl5. I was uninjured except for a bruised hip from the seatbelt and walked away5. Inspection revealed the tanks were dry.

I later learned there had been other fuel-exhaustion incidents in 210s, at least one of them fatal. It turned out a fuel tank breather defect was trapping air, in my case verified at 20 gallons.

So, the lessons are:

1-Why cancel IFR on a dark night?
2-Why wait to correct a known deficiency?
3-Who cares about exchanging potential and kinetic energy for 60 nm?
4-Keep your cool.
5-Be lucky.

If youve ever wanted to see something you wrote appear in an aviation magazine with your name, heres your chance. Each month, this space is devoted to giving readers the opportunity to share with other pilots something theyve learned about flying aircraft. Well always assure anonymity if you want it, but well be happy to put your name on it, also.