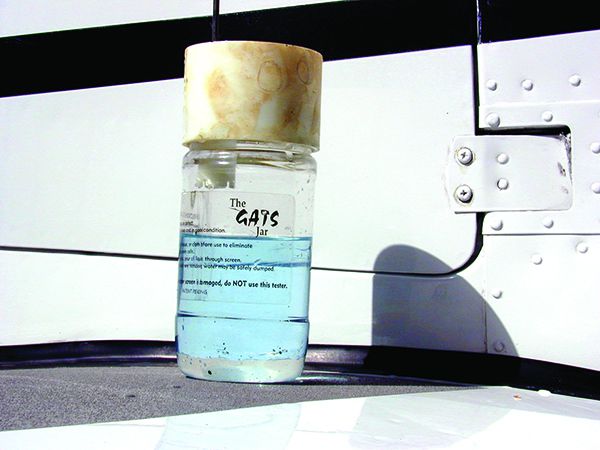 After an extended period at the paint shop, during which my 1976 Cessna 210L Centurion sat outside in the central Florida weather awaiting additional work for a few weeks, the airplane was finally finished. I have to admit I was pleasantly surprised that the plane looked so great and I was eager to take it home.

I did a very careful preflight, checking all the movable surfaces for correct action, and I drained all the fuel sumps more than once. It seemed there was a noticeable amount of water in the fuel tanks, causing me to drain the sumps a few more times. When I fired up the engine after a rough start, it settled down and seemed to be producing power normally. I taxied out and departed without incident, and flew back to the airplane’s home base. A few days later, I took a local flight and once again checked the fuel for water. The engine ran well and my flight was uneventful, as were several subsequent local flights.

A few weeks later still, I was taking my wife and her mother on a short flight. During the run-up, I noticed a slight engine hesitation, which quickly went away. Then during the takeoff roll, the engine began to sputter and I aborted the takeoff. The maintenance shop foreman assured us that it was probably just a dirty injector, so I left the plane with the shop to have the injectors cleaned.

Before a flight the following week, the run-up was normal. However, shortly after takeoff at about 500 feet agl, the engine began to sputter badly. After a too-exciting approach and landing, I returned the plane to the maintenance hangar and told the mechanic that a complete examination of the fuel system was in order.

After describing the events to an old pilot/friend, I learned the problem might be in the fuel distributor. When it was examined, technicians found small oxidized aluminum particles, which formed from mixing with water. During the plane’s long stay at the paint shop, its exposure to rainy weather apparently allowed the fuel system to accumulate enough water to cause oxidation.

We were very fortunate that the problem was slow-developing and did not cause a complete engine failure. However, I would strongly recommend that anyone whose airplane is in mainetance for a lengthy time to instruct the shop on its proper handling. Upon completion, a very thorough job of examining not only the flight controls but the entire fuel system should be done.

Also, I would be suspicious of any shop that leaves unfinished aircraft out in the weather for long periods of time. Since replacing the fuel distributor, we have not had any other fuel-related interruptions in over 300 hours of flying.

Have you encountered a situation or hazardous condition that yielded lessons on how to better manage the risks involved in flying? Do you have an experience to share with Aviation Safety’s readers about an occasion that taught you something significant about ways to conduct safer flight operations? If so, we want to hear about it.

We encourage you to submit a brief (500 words) write-up of your Learning Experience to Aviation Safety for possible publication. Each month, Aviation Safety publishes a collection of similar experiences sent to us by readers. Sharing with others the benefit of your experience and the lessons you learned can be an invaluable aid to other pilots.

You can send your account directly to the editor by e-mailing it to avsafetymag@gmail.com. Put “Learning Experience Submission” in the subject line; add your name and daytime telephone number at the bottom of the e-mail.

Your report will be considered for publication in the Aviation Safety’s readers’ forum, “Learning Experiences,” and may be edited for style and length. Anonymity is guaranteed if you want it. No one but Aviation Safety’s editor is permitted access to the reports. Your name and telephone number are requested only so that the editor can contact you, if necessary.

While we can’t guarantee your submission will get published, we can guarantee that we’ll closely review and consider using it.

All Learning Experience submissions become the property of Aviation Safety and may be republished.