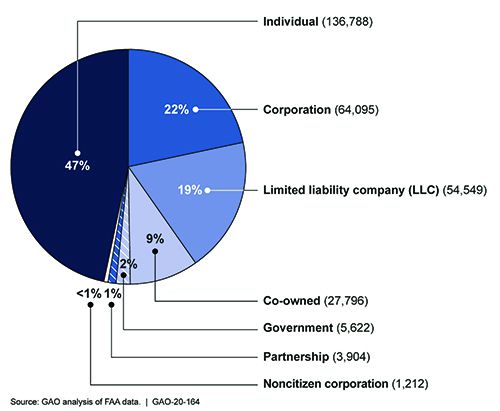 In early April, as this issue was being finalized, the FAA had taken several steps to provide relief for certificate holders at the same time it warned it likely would take a dim view of state or local governments who want to close any federally funded airports as part of their response to the Covid-19 disease. In several recently published guidance documents, the agency has repeatedly stated that any proposal to close an airport—and even some businesses at an airport—must first be agreed to by the FAA’s Office of Airports, which will evaluate them on a case-by-case basis. As one document stated, “Proposed measures cannot close a Federally-obligated airport absent prior FAA authorization,” and airport management must consider all essential aeronautical services. The sidebar below includes the guidance letter’s full text.

At the same time—and recognizing social distancing practices—the agency has taken steps to extend expiration deadlines for medical certificates and even extended the deadline for a major new airworthiness directive (AD) affecting certain Cessna 210 models and their wing spars. For those carrying an FAA medical certificate set to expire between March 31, 2020, and June 30, 2020, the FAA announced on March 26 that it will not take enforcement action against a required crewmember (that’s you) “based on noncompliance with medical certificate duration standards.” And thanks in part to ongoing shortages of the N95 masks recommended for use with the chemicals required for testing, the new compliance deadline for the Cessna 210 spar AD is extended to September 9, 2020 (or the next 20 hours in service, whichever comes first). 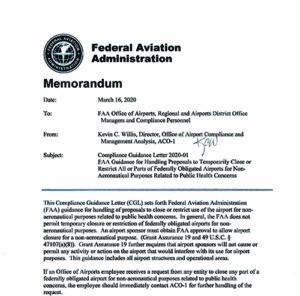 With all the political craziness we’ve seen in the U.S. recent weeks, it’s only a matter of time before some local official tries to close his community’s local airport. If the airport has accepted federal funding for maintenance or improvements in recent years, that may not be possible under longstanding FAA policy, thank in part to guidance released in March 2020 and reproduced at right. The memorandum’s full text reads:

“This Compliance Guidance Letter (CGL) sets forth Federal Aviation Administration (FAA) guidance for handling of proposals to close or restrict use of the airport for nonaeronautical purposes related to public health concerns. In general, the FAA does not permit temporary closure or restriction of federally obligated airports for nonaeronautical purposes. An airport sponsor must obtain FAA approval to allow airport closure for a non-aeronautical purpose. (Grant Assurance 19 and 49 U.S.C. § 47107(a)(8)). Grant Assurance 19 further requires that airport sponsors will not cause or permit any activity or action on the airport that would interfere with its use for airport purposes. This guidance includes all airport structures and operational areas.

“If an Office of Airports employee receives a request from any entity to close any part of a federally obligated airport for non-aeronautical purposes related to public health concerns, the employee should immediately contact ACO-1 for further handling of the request.”

There was no word on what happens with expiring medical certificates after June 30, presuming social distancing practices are still recommended and the high demand for health care professionals continues. Importantly, the FAA’s action is not binding on insurance companies, whose policies generally require the pilot in command to have a valid medical certificate to be covered under a policy, although some insurers said they would honor the effective deadline extension. Other accommodations the FAA announced are summarized in the table at top right.

At the same time, it’s important to note that those same social distancing recommendations basically preclude dual instruction. The image at top left is a partial screen shot from the Virginia Department of Aviation’s web site, which recognizes social distancing recommendations in effect in early April and states that “dual instruction in small aircraft” is not allowed in the state. How it all might be enforced is another matter.

Dual Instruction In Small Aircraft Not Allowed by Executive Order 55 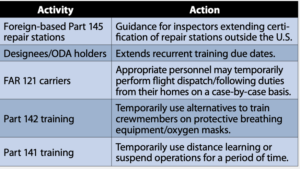 Governor Northam’s Executive Order 55 has a six feet separation andate that means that conducting flight instruction or certification in small aircraft is not possible since there’s no way to be six feet apart in a small aircraft.  Individuals would be allowed to conduct solo training in an aircraft.

Students may still participate in aviation ground school provided the class has less than 10 people and they maintain the mandated six feet of separation.

The order does not prevent the rental of aircraft to individuals.

The U.S. General Accountability Office (GAO) recommended the FAA make 15 changes to the ways it registers aircraft to minimize fraud and abuse. The recommendations came in a 92-page report released on March 25, 2020. First among the changes GAO recommended are that the agency “should conduct and document a risk assessment that considers inherent and residual fraud and abuse risks that may enable criminal, national security, or safety risks.” An additional recommendation is that the FAA “collect and record information on individual registrants, initially including name, address, date of birth, and driver’s license or pilot’s license, or both.” Any additional information the FAA may require to register aircraft would be a result of a yet-to-be-performed risk assessment.

Additional recommendations involve collecting information on 25-percent or greater owners of legal entities not traded publicly, increasing fees to cover costs and using collected data “to identify and analyze patterns of activity indicative of fraud or abuse.” The GAO said the registry is vulnerable to fraud and abuse when “opaque ownership structures” are used. In a letter, the FAA said it concurs with the recommendations and will work with other agencies to address them.