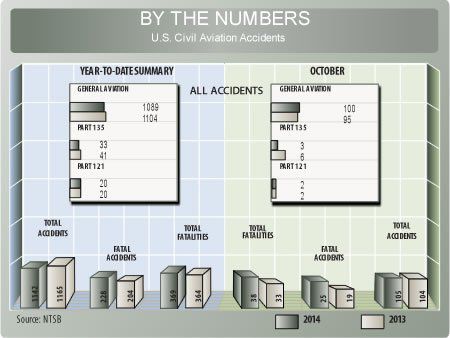 The airplane was substantially damaged at about 1017 Central time during an aborted takeoff. The private pilot and passenger were not injured. Day visual conditions prevailed.

The pilot reported that, upon reaching 80 KIAS, he applied aft yoke pressure to lift off but the airplane did not respond. He attempted to lift off a second time, using both hands on the yoke, but the airplane again did not respond. The pilot aborted the takeoff by reducing engine power to idle and applying wheel brakes, but the airplane overran the end of the runway into a plowed field where the landing gear collapsed. The left wing sustained substantial damage after the landing gear collapsed.

The airplane was substantially damaged during a forced landing at about 1145 Pacific time. The solo private pilot was not injured. Visual conditions prevailed.

Moments after taking off, the pilot experienced a loss of engine power and elected to make a forced landing to a golf course off the departure end of the runway. During the forced landing, the airplane impacted a tree with its right wing, resulting in substantial damage. The airplane subsequently came to rest upright.

At about 1140 Pacific time, the airplane sustained minor damage as a result of a nose landing gear collapse. The commercial pilot and two passengers were not injured. Visual conditions prevailed.

According to the pilot, after touching down on both main landing gear, the nose wheel was lowered. The pilot stated that this was followed by an immediate shimmy, which quickly became severe. The pitch control was then pulled back to alleviate pressure on the nose gear, but the nose gear collapsed two to three seconds later. The airplane skidded on the runway for about 1000 feet before veering right onto the grass adjacent to the runway and came to rest upright.

The airplane was substantially damaged at about 0850 Pacific time following a landing gear collapse on the takeoff roll. The commercial pilot and one passenger were not injured. Visual conditions prevailed.

At about 2330 Central time, the airplane impacted terrain during a forced landing following an in-flight loss of engine power. The private pilot and passenger were uninjured. The airplane sustained substantial wing damage. Night visual conditions prevailed.

After apparently buying the airplane earlier that day, the pilot and his mechanic were in cruise flight at 8500 feet msl when the pilot heard a “pop” and felt a “severe vibration” for about five seconds. The engine “rapidly” lost power. An “explosion” was heard and the airplane subsequently decelerated and pitched down. Attempts to restart the engine were not successful. While maneuvering for a forced landing on a road, the landing gear selector was placed in the down position, but only the main landing gear showed down and locked; emergency procedures failed to extend the nose landing gear. During the landing, the airplane impacted a highway sign and a culvert, traveled over a ditch and came to rest about 50 feet from the road.

The airplane was destroyed at 1439 Eastern time, during a collision with terrain following a loss of engine thrust during initial climb. The two foreign-certificated pilots and two passengers were fatally injured. Visual conditions prevailed.

The left propeller had been removed and replaced with an overhauled propeller prior to the accident flight. The accident flight was the first one since the overhauled propeller was installed on the left engine. The flight was cleared for takeoff at 1436:45. At 1438:15, one of the pilots reported an “engine failure” and was cleared to land on Runway 27L. The airplane subsequently impacted a utility pole and terrain about two miles west of the runway. Radar data revealed the airplane never climbed above 300 feet agl. Witnesses observed the left wing down and the left propeller turning slower than the right propeller before the airplane impacted the utility pole.

A post-crash fire consumed a majority of the cockpit and cabin. The left propeller remained attached to the left engine; two of its four composite propeller blades had separated at the hub. The other two blades were separated about one foot from the hub. Both engines and propellers were retained for further examination.

At about 1433 Mountain time, the airplane was destroyed after impacting terrain during an off-airport forced landing. The two pilots were fatally injured. Day visual conditions prevailed.

A witness reported hearing the engine making odd noises upon its arrival. The accident airplane’s pilots told him they had been having difficulties with the engine. After the witness assisted them by loaning them a piece of wire to bypass the starter solenoid, the pilots were able to successfully start the engine. As the airplane taxied for departure, he heard the engine run rough again but did not witness the takeoff.

Another witness reported the airplane flew over him at about 200 to 300 feet agl. The engine was running rough, and he heard it occasionally missing. The airplane had passed his location when he heard a backfire and he thought the engine stopped running. The airplane descended and struck the ground at high speed in a nose-down dive of about 30 degrees with the wings level. There was an immediate post-impact fire.

According to the pilot, while circling an area about 10 nm south of the destination airport, he heard something like a pop in the engine, which was followed by a total loss of engine power. The pilot switched fuel tanks and activated the boost pump, but the starter would not turn over the engine. He subsequently made an emergency landing to a beach spit. During the landing roll, the airplane nosed over and came to rest inverted, resulting in substantial damage to the rudder.

At about 2136 Mountain time, the airplane sustained minor damage during a rejected takeoff. The five passengers and two pilots were not injured. Visual conditions prevailed; an IFR flight plan was filed for the Part 91 executive/corporate flight.

The airplane’s previous flight landed about an hour earlier, with the same crew, who reported no anomalies. During the initial takeoff attempt, at about 75 knots, a triple chime sounded and a master warning illuminated. The crew rejected the takeoff with “light” brake pressure, coasting to the end of the runway; they did not observe any message on the Crew Alert System (CAS), there were no exceedance events recorded and the crew did not observe any tripped circuit breakers.

During the second attempt, as the airplane accelerated through approximately 75 knots, the triple chime/master warning activated again. The crew continued the takeoff. At VR, the captain pulled back on the control yoke, but the flight controls did not seem to respond normally. He added that the controls had no “noticeable pressure resistance and felt unloaded with hydraulic pressure.” He noted that the yoke was moved “forward and then back further aft” with the same result.

The crew subsequently rejected the second takeoff, applying maximum braking and full reverse thrust. A right brake fire ensued. The flight crew and passengers evacuated without injury. A post-incident examination has not revealed any anomalies with respect to the flight control system. The cockpit voice recorder has been shipped to the NTSB recorders lab for download and analysis. According to the NTSB, “At the present time, there is no indication that the circumstances of this incident are related to any previous GIV takeoff accidents or incidents.”

The airplane collided with terrain at 0048 Central time while landing. The commercial pilot and one passenger received serious injuries; the remaining two passengers were not injured. The airplane was substantially damaged. Instrument conditions prevailed; an IFR flight plan had been filed.

The airplane contacted terrain about 3000 feet short of the runway and traveled about 1000 feet before coming to rest. Initial examination revealed inch of ice was present on the leading edge of the wings, vertical stabilizer and horizontal stabilizer.

At about 2109 Central time, the airplane was substantially damaged when it collided with terrain following a loss of control during an instrument approach. The solo commercial pilot was fatally injured. Night instrument conditions prevailed; an IFR flight plan had been filed.

The airplane’s flight path was captured by a security video camera about mile southeast of the accident site. The video camera captured the accident airplane’s wingtip navigation and strobe lights. The airplane appeared to be in a wings-level descent as it continued across the first half of the camera’s lateral field of view. At 2109:00, the descent angle increased substantially before the airplane entered a near-vertical spiraling descent. The airplane’s navigational lights and strobes were not visible after 2109:09.

The airplane collided with a television tower’s guy wire at 1930 Central time while on approach. The solo pilot was fatally injured and the airplane was destroyed. Instrument conditions prevailed; an IFR flight plan had been filed en route.

The pilot was executing the RNAV Y approach to Runway 35L. The controller vectored the airplane off of its first attempt for resequencing. While the airplane was being vectored for a second approach, radio and radar contact was lost. A witness heard the accident airplane overhead, looked up and saw a large flash of light that filled his field of view. He observed the TV tower’s red beacon lights turn off and then the tower collapsed on top of itself. Surveillance video recorded the airplane in a 30-degree nose-low descent near the tower. There were multiple bright flashes of light and the airplane was not observed again.

At about 0030 Pacific time, the helicopter sustained substantial damage following a partial loss of engine power and subsequent forced landing. The solo commercial pilot was not injured. The helicopter was operated as an aerial application flight under FAR Part 137. Night visual conditions prevailed.

The pilot reported experiencing a loss of engine power during the first turn. His attempt to autorotate was unsuccessful because of his low altitude. The helicopter landed hard and rolled onto its right side, resulting in substantial damage to the forward fuselage and tailboom.