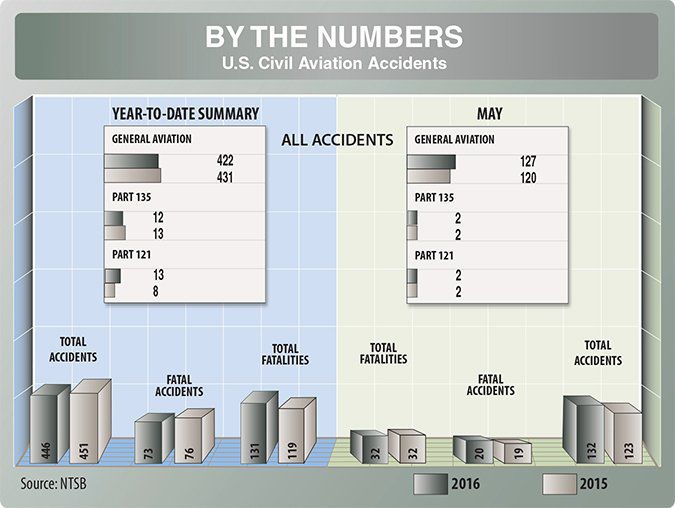 At about 0900 Eastern time, the airplane was substantially damaged upon impacting an aircraft hangar following a total loss of engine power during a go-around. The flight instructor (CFI) and a student pilot received minor injuries. Visual conditions prevailed.

The two had been practicing takeoffs and landings for about an hour when, on the downwind leg of the traffic pattern, the CFI directed the student to demonstrate a simulated engine failure. The airplane was about of the way down the runway when he initiated go-around. At this point, the engine sputtered and lost power. The CFI took over the flight controls and made a left turn at about 100 feet agl with the intent of flying over a hangar to a clear area beyond but realized they would not clear it. He placed the airplane in a 45-degree nose-up attitude so the engine penetrated the hangar’s metal door first.

At about 0230 Pacific time, the airplane was substantially damaged during a gear-up landing. The private pilot and single passenger were not injured. Visual conditions prevailed; an IFR flight plan was active.

While being vectored for an ILS approach, the pilot suffered a partial electrical failure, which disabled the landing gear position indicator lights and the warning horn. The pilot proceeded with the approach to get the airplane on the ground as soon as possible. The pilot subsequently made a gear-up landing, slid down the runway and came to a stop upright.

Later, when the airplane was being recovered in daylight, the pilot noticed one of the two tie buss main circuit breakers had tripped, which he had been unable to see in the darkness while making the approach. When he reset the breaker, the panel lights came back up, the gear warning horn came on, the landing gear cycled normally and the three green landing gear lights illuminated.

The airplane was substantially damaged during a forced landing at about 1030 Central time. The commercial pilot sustained minor injuries. Visual conditions prevailed.

According to the pilot, the flight’s purpose was to use most of the fuel in the airplane, as he was going to park it over the summer. In the past, the automotive gasoline had “gummed up” his system sitting in the heat over the summer. The pilot flew to an airport 17 miles away and was returning at 2500 feet agl when the engine lost power. During the forced landing to a small field, the airplane hit a tree, resulting in substantial damage to its wings and fuselage. The pilot stated he was confident that he just ran out of fuel, resulting in the loss of engine power.

According to the pilot, he departed on a cross-country flight but did not visually check the fuel in the main tanks before departure. The flight was uneventful until the pilot made an instrument approach into his destination airport; he had to execute a missed approach. During the missed approach procedure, he entered visual conditions and circled to land. As he was turning crosswind, the engine stopped producing power. The pilot did not have time to switch the fuel selector and ended up striking trees and landing short of the runway threshold. About 20 oz. of fuel were drained from the right main tank; about 21 gallons of fuel were drained from the left one.

During a takeoff from a wet grass runway, the pilot believed the airplane would not clear trees at the end of the runway. He aborted the takeoff by pushing the nose of the airplane down and reducing power to idle. Subsequently, the airplane touched down hard in a nose-low attitude, which resulted in a nose gear collapse and propeller strike on the runway. The firewall and both wings sustained substantial damage. All four aboard the airplane were uninjured.

According to information the pilot provided the NTSB, the estimated airplane weight and balance should have been within limitations. The NTSB noted the airplane’s takeoff performance charts did not provide information for departing from wet grass surfaces.

While landing on a back-country dirt airstrip, the left wing lifted due to a gust of wind. The pilot further reported that he established a faster-than-normal ground roll by maintaining some power to taxi up the incline of the airstrip. As the end of the runway approached, the pilot was unable to stop the airplane, which overran the runway and hit a dirt berm, collapsing the nosegear and causing substantial damage to the fuselage.

At 1759 Eastern time, the airplane was substantially damaged during a collision with terrain after takeoff. The commercial pilot/owner/builder was seriously injured. Visual conditions prevailed.

The two-seat, twin-engine, low-wing airplane was constructed from a Van’s RV-8 single-engine airplane kit. Instead of the nose-mounted, single-engine configuration for which the kit was designed, the airplane was equipped with two wing-mounted engines. Both wings and the tail section were substantially damaged in the accident.

According to the passenger, the flight’s purposes was to assist in a search for a boat that sank in the lake. The pilot and passenger spotted the boat and then flew a right-turn “racetrack” pattern at about 150 feet agl. While maneuvering, the airplane was banked about 45 to 60 degrees at an airspeed of about 50 miles per hour. During a turn, the airplane “snapped over” and the pilot stated the airplane stalled. The airplane spun about 1.5 to two rotations, impacted the lake, and sank. The passenger stated the engine operated normally until impact with the water.

According to local authorities, the passenger was rescued by persons assisting in the boat recovery. Efforts to rescue the pilot were unsuccessful.

At about 1700 Central time, the airplane nosed over during a forced landing following an inflight loss of engine power. The private pilot was fatally injured; the single passenger sustained minor injuries. The airplane was substantially damaged during the nose over. Visual conditions prevailed.

Residents near the accident site heard the airplane engine sputtering and saw it descending. The airplane was found inverted in an area of rolling land with clear-cut tree stumps present. An FAA inspector found the fuel tank selector handle in the “both” position shortly after arriving at the accident site.

The airplane was substantially damaged when it impacted terrain at about 1309 Central time following a loss of control during initial climb. The pilot and the two passengers were fatally injured. Visual conditions prevailed.

After arriving in the terminal area, the airplane was approaching Runway 4 for a landing when the tower controller directed the pilot to go around and enter right traffic for Runway 35. During the second approach, the pilot was again directed to go around and to expect another approach to land on Runway 35. On the last approach, the airplane was landing to the north on Runway 35 when the pilot radioed she was going around. Witnesses saw the airplane at low altitude when it suddenly turned to the left and began descending. A security camera’s video footage showed the airplane was spinning to the left and was about 45 degrees nose down in a wings-level attitude when it impacted an unoccupied automobile in a hardware store parking lot about mile north of Runway 35. The 1253 automated weather observation included wind from 100 degrees at 12 knots, gusting to 16 knots.

At about 1527 Central time, the airplane impacted terrain shortly after takeoff. The pilot and two passengers were fatally injured; the airplane was destroyed. Visual conditions existed.

According to his parents, the pilot was flying his aunt and cousin to obtain dental care for the cousin. A witness noticed the airplane depart and climb out in a nose-high attitude. After entering a right turn, the airplane rapidly pitched down to a nose-low attitude. The airplane impacted a lake about mile southwest of the airport, coming to rest in about four feet of water in a steep, nose-low attitude.

The flight instructor and the pilot assessed the damage and controllability of the airplane, and decided to continue their flight since they did not want to do any more maneuvering than was necessary and they were already headed toward their destination airport. During cruise flight, the flight instructor noticed some “pulling” to the left and some visual damage to the left wing. They landed at their destination airport uneventfully. Post-accident examination revealed substantial damage to the left wing and aileron.

The airplane collided with a berm during the landing roll at about 1610 Eastern time. The airline transport pilot was not injured; the airplane was substantially damaged. Visual conditions prevailed. The flight was the airplane’s first after an annual inspection, and it had not been flown for about two years prior.

After two touch-and-goes, the pilot intended to perform a full-stop landing. The pilot reported the touchdown was normal and in the typical location. After touchdown, he retracted the flaps and allowed the airplane to roll to the end of the runway. As the airplane approached the end of the runway, the pilot applied both brakes but the left brake did not function. He secured the engines, and attempted to maintain control while applying the right brake in an effort to slow the airplane. The airplane went off the right side of the runway at the end and contacted upsloping terrain, causing damage to the left horizontal stabilizer.

At 1710 Pacific time, the airplane was destroyed when it impacted a residence shortly after takeoff. The private pilot/owner and flight instructor were fatally injured. There were no ground injuries. Visual conditions prevailed.

Earlier, the pilot/owner telephoned the ATC tower to arrange for a no-radio departure utilizing light gun signals. During the subsequent takeoff, controllers observed the airplane become airborne, settle back onto the runway, then become airborne again, and stated that it “remained low” as it climbed out.

A witness’ attention was drawn to the accident airplane due to the “rough” sound of its engine. He estimated its altitude at the departure end of the runway to be between 400 and 500 feet agl. As the airplane continued west, he saw it disappear below trees and buildings, and subsequently observed black smoke in the vicinity of its last observed position.

Initial impact was with a 30-foot-tall palm tree. The majority of the airplane’s left wing came to rest under the tree, and exhibited a concave depression consistent with the diameter of the tree. The main wreckage came to rest against a residence, and was consumed by a post-crash fire. No information could be obtained from the cockpit instruments.