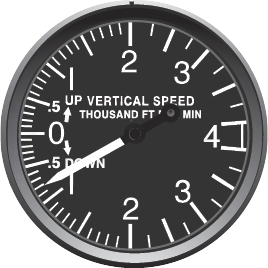 Reading Mike Hart’s February 2019 article, “Losing Orientation,” brought back a not-so-fond memory. As a recently certified instrument pilot, I had started making semi-regular trips to visit my mother. I was flying a Piper Warrior II, but we hadn’t gotten around to installing a GPS yet. So my trip was a series of four VORs up and the same four in reverse to get home.

On the day in question, Flight Service’s briefing basically consisted of, “Enjoy your flight; it’s CAVU all the way.” Off I went and had a nice day and lunch with mother. Late that afternoon, I called Flight Service about the flight home and received the same briefing: “CAVU.” Soon, I was enjoying a smooth ride up at 10,000 feet, had crossed VOR #2 and adjusted course toward VOR #3…and what’s that ahead?

For a supposedly CAVU day, I was now pointed at a solid cloud bank. I transitioned to instruments while still VFR and entered the clouds continuing toward VOR #3. It was still smooth as I crossed it and adjusted course toward VOR #4. Shortly after crossing VOR #3, there suddenly were a lot of pilots on the frequency asking for course and/or altitude changes to “get out of this weather.” I was still enjoying a smooth ride.

About this time, something in my peripheral vision caused me to turn my head to take a quick look outside the left side of the airplane and down. And as I did, I hit one (and only one) severe jolt of turbulence. And I became completely disoriented. My vision blurred to where I could not make out the instrument panel. I stared at the attitude indicator and could barely make out blue and brown, so I concentrated on just trying to keep the same amount of brown and blue visible, with blue on top. It seemed like forever, but slowly my vision started coming back and I started being able to see the AI better and was able to discern I was at least straight and level.

When I thought I could handle it, I checked and found I was 40 degrees off-heading, so I started a slow turn back toward the VOR radial. I was 400 feet low, so I started easing back up and continued on. While it seemed like forever, it must have only been a few seconds because ATC never called me to ask about my heading or altitude deviations. Eventually, I let ATC know I’d had a single jolt of severe turbulence shortly after crossing VOR #3. Mr. Hart was exactly right—don’t move your head too much when there may be turbulence in the area!