Unless you’re flying a tailwheel-equipped airplane, you really don’t want the tail to touch the ground. It’s potentially dangerous, not to mention embarrassing. And a tail strike—when the tail section of an airplane contacts the surface while taking off or landing—can result in significant damage to the aft section of a tricycle-gear airplane. The good news is that tail strikes are preventable.

Multiple causes of tail strikes during takeoff and landing have been described (see the table at the top of the opposite page). For example, during a takeoff, it can happen because a pilot pulls back too much on the pitch control, leading to an excessively high nose-up attitude and angle of attack (AoA). During landing, it is likely to occur when a pilot pitches up and flares too aggressively prior to touchdown.

While tail strikes may be more prevalent in large, long-body jet transports, they also can afflict general aviation aircraft. Costing thousands of dollars for repairs of external and internal damage to the tail sections and aft bulkheads of airplanes, tail strikes largely depend on human factors, i.e., pilot error. Strategies for mitigating tail strikes include maintaining pilot proficiency at a high level and employing basic risk management principles to identify when they are most likely and implement controls to mitigate their hazards.

Notify appropriate personnel if undocumented damage is found. If a tail strike occurred on a previous landing, substantial internal damage to vital airplane components (control cables, pulleys, etc.) may have resulted. From a risk management perspective, it’s prudent to have the airplane inspected by a certificated individual. If the inspection uncovers damage, it must be repaired prior to flying the airplane.

• Strong crosswinds and gusty winds may:

• Predispose to a transient loss of airspeed immediately following liftoff/rotation, leading to reduced lift generated by the wings while the nose is pitched up. As one result, the airplane’s tail may settle back to the surface.

• Raise the upwind wing and nose during liftoff/rotation leading to an unusual attitude that in turn forces the tail down to strike the surface.

At least partially owing to its delta-wing design, which requires relatively high angles of attack at low speeds, Concorde was equipped with a wheeled tailskid, retracting and extending with the landing gear. You could call it a supersonic taildragger.

Based on my 20 years of experience as a flight instructor, it seems many pilots incorrectly believe that at the moment liftoff or rotation speed (VR) is reached during the takeoff roll, they must hurriedly pull back aggressively on the pitch control to pull the airplane off the runway. This practice may result in an excessive initial pitch-up attitude and AoA, over-rotation around the lateral axis and a tail strike before the airplane is ready to fly.

Keep in mind also that the published VR and actual liftoff speed may not be the same.  For example, consider a Cessna 172S loaded at maximum takeoff weight with a density altitude of 5000 feet under calm wind conditions. Rather than 55 KIAS, the published VR, a flying speed of approximately 60 to 70 KIAS may be required to takeoff safely. Other improper rotation techniques leading to a tail strike include attempting to rotate prior to achieving VR (too early rotation) and using an excessive nose-up elevator trim setting that can cause a sudden and overly high nose-up attitude.

To mitigate the tail strike hazard during normal takeoffs, avoid abrupt pitch control inputs. At VR, gently apply nose-up pressure on the pitch control and, while holding pressure, allow airspeed to increase and with it the wing’s lifting force. Because the force of lift varies directly with the square of airspeed, as airspeed increases during the takeoff roll, wing lifting force increases exponentially.

Proper energy management technique includes using an appropriate amount of kinetic energy to take off safely. When sufficient lifting force is generated during the takeoff roll, allow the airplane to gently lift off the runway instead of aggressively pulling it off the runway as described above. Attempting to rotate too early with insufficient energy can lead to a power-on/takeoff stall immediately above the runway as the airplane leaves ground effect. To mitigate risks of over-rotating and a too-high AoA, use the sight picture out the front of the airplane as a guide. For example, on many airplanes, it works well to pitch up slowly so the sight picture depicts the engine cowling just barely touching the departure end of the runway.

Soft-field takeoffs can be problematic to avoiding tail strikes. Pilots typically want the pitch control in the full nose-up position while taxiing and prior to applying full power. When full power is applied, and if back pressure is not relieved appropriately, the airplane is likely to pitch up abruptly, over-rotate and strike its tail. Instead, immediately after applying full power, anticipate a sudden nose-up pitching moment. When it occurs and following application of full power, apply appropriate nose-down input to the pitch control to arrest the over-rotation and looming tail strike. An ideal pitch attitude is one that gets the nosewheel slightly off the ground while avoiding a tail strike.

Attempting to land by flaring with an excessive AoA while too high above the runway (for example, 100 to 200 feet) and with the throttle set to idle is a recipe for a power-off (landing) stall leading to a tail strike.

To mitigate over-rotation and tail strike damage while landing, level off a few feet above the runway and then use the end of the runway as a sight picture to assess the roundout, i.e., slowly pitch up just enough so the nose of the airplane barely touches the far end of the runway and start the flare at VREF as stated in the airplane’s documentation. The airplane should be in trim at the start of the flare; do not trim in the flare or after touchdown. After touchdown, do not allow the pitch attitude to increase excessively in an attempt to “hold the nose wheel off” the runway.

Some aviation authorities contend that tail strikes on landing generally cause more damage than on takeoff because the airplane’s tail may forcefully strike the runway before the main gear touches down. The University of North Dakota’s Aerospace Department asserts that during the landing phase, over-rotation and tail strikes are more likely to occur when flying an unstabilized approach on final. Although what a stabilized approach is and how to achieve it are beyond this article’s scope, the Airplane Flying Handbook (FAA-H-8083-3B) states it involves “a constant angle glide path toward a predetermined point on the runway.”

To mitigate the potential for tail strikes during landing, fly a stabilized approach all the way down to touchdown. If not flying an electronic glide path, use available visual references like a precision approach path indicator (PAPI) and keep the airplane on the extended runway centerline. Proper airspeed also is integral to a stabilized approach, and you should use the manufacturer’s reference landing approach speed (VREF). If no VREF is published, use 1.3 times stalling speed in the landing configuration (VSO)  for a normal landing or 1.2 VSO for short fields, as recommended, plus 50 percent of the reported gust value, if any.

Weather conditions such as high crosswinds, gusty winds and turbulence on final approach may destabilize your approach, placing you too high or low, too far left or right and/or too slow on final leading to an extreme touchdown attitude and a tail strike. Although avoiding the risks of a tail strike is as good a reason as any to go around, there are many other reasons unstabilized approaches should be avoided to prevent losing control at a low altitude and bending the airplane. 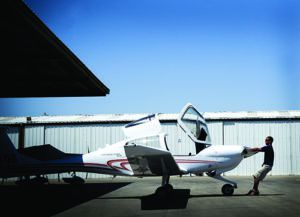 Non-proficient pilots with poor risk-management skills are predisposed to tail strikes during takeoff and landing. Maintaining pilot proficiency through recurrent takeoff and landing training from a flight instructor at regular intervals (for example, every six months), including crosswind approach and landing training, will help prevent tail strikes, plus other maladies. In addition to sharpening flying skills, recurrent pilot training can also lead to learning new concepts, like how to apply basic risk-management principles for identifying tail strike hazards and mitigating them.

Proficiency in landing with a crosswind is a requisite pilot skill needed to mitigate the risk of a tail strike. The Airplane Flying Handbook recommends the wing-low (sideslip) method for accomplishing a crosswind approach and landing. With this method, during final approach the upwind wing is appropriately lowered into the wind to control for the rate of drift imposed by the crosswind. Because the airplane tends to turn in the direction lowered wing, it is necessary to fly the final approach leg using rudder pressure opposite the lowered wing to keep the airplane’s longitudinal axis aligned with the runway centerline. In this attitude, the airplane is side-slipping. For landing, the sideslip is maintained throughout the roundout, and touchdown is made on the upwind main wheel, followed by the downwind main wheel and finally the nose wheel.

Tail strikes may not be the most dangerous aspect of  landing and takeoff operations, but they are emminently preventable. Over-rotating during takeoffs, sometimes due to misset trim and/or aft loading, is a common reason. The same is true when landing, especially after a long flight when fuel burn changes the center of gravity’s location. Crosswinds and gusts during runway operations also take their toll. Regardless, it’s up to the pilot to recognize these risks and take appropriate steps to mitigate them. 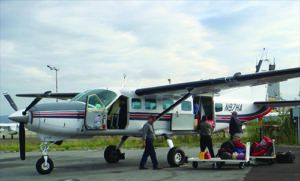 Prior to departure, a non-proficient pilot may incorrectly load the airplane such that it exceeds maximum takeoff weight and/or place the center of gravity (CG) too far aft; both factors promote a tail strike while taking off and landing. Low pilot proficiency, carelessness, sloppiness and ignorance are causes of excessive takeoff/landing weight and improper CG position.

Mitigating this hazard requires taking the time to carefully determine that the airplane’s weight does not exceed maximum takeoff weight and that the CG is balanced within the proper range to help reduce the incidence of tail strike risks on takeoff and landing.