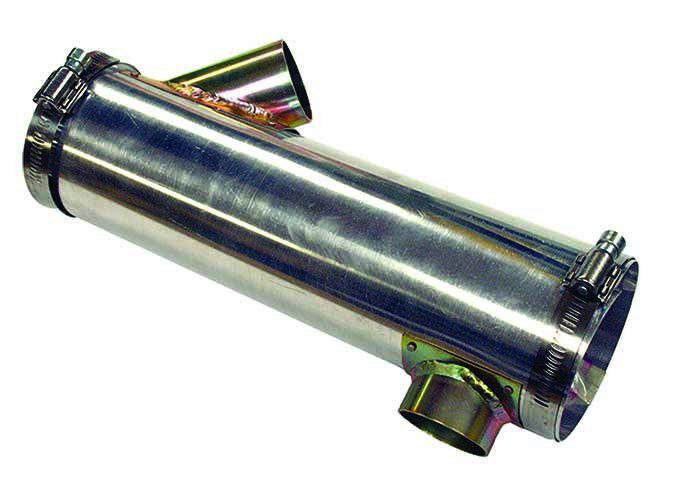 Pilot observed smoke in the cockpit, declared emergency and landed normally. Inspection of the right engine compartment revealed the muffler’s aft wall was missing and exhaust was directed onto the battery box. Hot exhaust melted the battery and battery contactor, clock fuse holder, both battery cables and boots. The gascolator push/pull control knob was melted. All electrical wiring in the engine compartment was destroyed.

The owner recalls engine backfiring when a student performed the ignition test IAW AD 76-07-12 at too high an rpm, which likely aggravated an already weak muffler (p/n 04504004), causing the failure.

Sitting on the ramp idling, the crew received a high CO warning after a couple of minutes. The engine was shut down and the warning ceased. Inspected muffler (p/n A175400125) and found spot welds pulling out from muffler liner, therefore releasing exhaust into the heat shroud.

During a scheduled inspection, the right engine’s rear muffler was discovered to be separated internally. The muffler’s outer shroud had become completely detached from the end pipes and the internal pipe. The muffler had been repaired 61 hours previously. It would appear that the crack initiated from the repair weld.

During a preflight inspection, the right engine’s aft muffler (p/n 86299007) was found to be missing its tail/exit pipe section. The muffler exhibited chafing marks. Analysis of this muffler plus others that were removed for repair showed the chafed area on the muffler can had worn into the metal surface, causing fatigue and leading to small cracks on all mufflers analyzed. The problem stems from the forward and aft mufflers chafing on each other and fatiguing the metal. Mufflers need to be narrowed or the riser design changed to allow more clearance between them, or a four-into-one design developed and approved.

Pilot found right side of muffler cracked over 50 percent of its diameter where the exhaust collector enters the muffler section. Aircraft was recently out of 2200-hour overhaul with new factory kit completed by an authorized service facility. There is no known reason for this crack to occur.