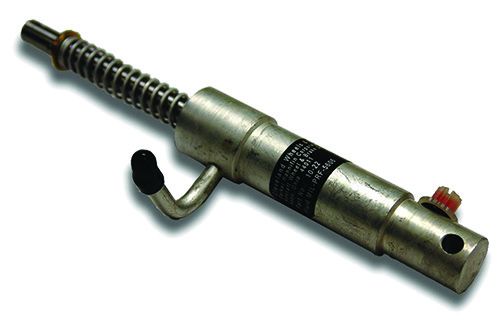 After a new master cylinder was installed, attempts to bleed the system failed. Instead, it pulled fluid from the reservoir and returned it through the same line—internal bypass not functioning properly. Disassembled and found bypass valve stuck. Parts were unable to slide smoothly on shaft; metal shavings were found inside. Metal shavings were found inside cylinder. Unit removed and replaced with new master cylinder.

While taxiing for takeoff, the right brake failed, resulting in the propeller contacting a taxiway light. Visual inspection of the right brake master cylinder revealed the cover’s chamfer was damaged and not allowing the piston rod end to fully seal when the brake was pressed, resulting in a decrease in hydraulic pressure and loss of directional control.

Pilot lost right brake on landing. Examination revealed brake master cylinder piston rod (p/n 0541143) was broken at base below clevis check nut (p/n 0541140). Upon further inspection, the clevis and check nut was found to have bottomed out on the piston rod, causing contact with the brake pedal shaft attachment horn, shearing the shaft below the check nut and causing the subsequent loss of brake capabilities.

The pilot experienced total failure of the left brake system during landing. No external leaks were detected following inspection and the reservoir was full. Air was noted in the reservoir during the bleeding procedure.