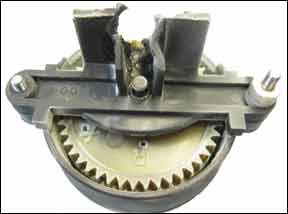 The nose landing gear failed to extend when the gear was lowered for landing-a nose-gear “up” landing followed. Examination revealed the uplock bellcrank forward

arm (p/n: 204303112) was bent and cracked through 90 percent of its material. It would not allow the uplock to disengage. The probable cause: severe side loading during landing at an unknown time. A new part was installed and a gear-rigging check made. No other problems were noted.

During a 100-hour inspection, a crack was found in the chain weld at the exhaust exit ball and the heat exchanger (p/n: 41303) cover. The cracks start at the finish point of the weld and continue through its center. The aircraft had been fitted with a Power Flow Systems exhaust assembly, component number PFS15102.

When removing this propeller, mounted to a Diamond DA40, for reseal, two cracked mounting nuts were discovered. The propeller had 93.5 hours since installation. This propeller previously had its blades replaced due to a propeller strike.

During a 500-hour inspection of the Champion Slick 6314 magnetos installed on a Cirrus SR20s TCM IO-360 engine, the left magneto showed signs of extreme internal heat. Slick SB-08A addresses “soft” carbon brushes packaged from September 1, 2004, through August 14, 2008. Champion Magneto Maintenance and Overhaul Manual L-1363E lists a 500-hour inspection and various other periodic maintenance procedures. The total time of this magneto was documented as 1672.8 hours. The magneto case screw had the factory applied torque seal in place.

New cylinders were installed at customers request during engine overhaul. After engine reinstallation, test runs were performed with normal results. As full power was applied on the first test flight, the engine lost power; the takeoff was aborted.

Examination revealed all intake valves were galled and sticking. The valves could not be moved by hand. The shop feels the issue is either the valve-to-valve guide clearance or metal incompatibility.