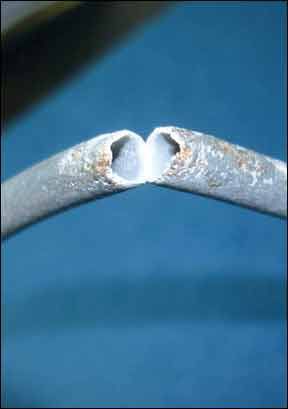 Out of concerns about chafing or corrosion, a technician was motivated to closely inspect the right fuel-flow pressure gauge line where it crosses the defrost duct. He was right, finding extensive corrosion at the point of contact. After the line was removed, slight bending pressure cracked the area wide open and it was seen that

the corrosion had actually penetrated to the inside of the line, yet the line was not leaking. If a leak started, the only way to stop it would be to shut down the right engine.

Shortly after a normal flight, engine restart could not be accomplished. The rubber tube connecting the intake manifold to the fuel induction rail was found to be fully separated at the manifold, causing a large vacuum leak downstream of the carburetor and rendering the engine inoperable.

The failed connection was between the Y-shaped intake manifold and the fuel rail on the right side.

The submitter recommends in- creased inspections-including paint removal at any bend radii-for tooling die and stress marks. Any line appearing under the minimum bend radius (standard) should be replaced.

The number-three crankshaft rod failed in flight, knocking a hole in the crankcase. The engine remained running and the pilot was able to return to the airport. One quart of oil remained in the oil tank. A tear-down inspection was performed but was unable to determine a conclusive cause for this engine failure (p/n 888164).

The l/h magneto on the r/h engine cut out while running the engine. After removing the magneto, the impulse coupling hub spacer was found to have pulled away from the rivets and split into two pieces.