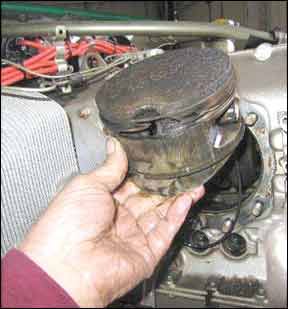 The fuel selector valve (p/n 756645) was stiff and the detents could not be felt. Teardown showed the valve was very dirty inside, and the detent ring was worn. Two service bulletins (SB 0355 and SB 0840) directly involve problems with this valve, neither of which were complied with on this airplane.
Part Total Time: 6961.0 hours

A pilot recently installed the Knots 2U aileron gap seals under a Supplemental Type Certificate. Subsequently, the pilot took off and climbed through moderate to heavy precipitation for 10 to 15 minutes, leveling off at 9000 feet msl, where the temperature was below freezing. After several minutes in level flight, the ailerons went from being very stiff to completely frozen and the pilot controlled the airplane with only rudder and elevator inputs.

After approximately 300 hours of operation, the number-five cylinder on a Continental O-470R engine experienced piston failure—appearing at first impression to be caused by detonation. However, the submitter believes the piston to have failed due to a flaw in its manufacture or experiencing damage (such as a fall to the floor) prior to installation.
Part Total Time: 300.0 hours (approximate)

While complying with AD 07-05-15 during an annual inspection, a broken tooth was found on the camshaft gear (p/n 656914). No other indications were found of related defects or damage, internally or externally, after the engine was disassembled. No metal (or the gear tooth) was found in the oil filter or the engine.
Part Total Time: 1828.0 hours