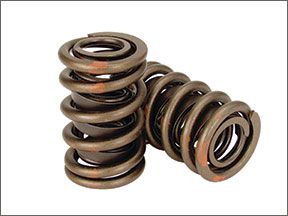 Bendix S6LN25 Magneto – Failed Cam Follower
After only 26 hours of operation after new parts were installed, this magneto quit producing spark. Troubleshooting found the point timing had drifted off and was impossible to reset within manual limits. The plastic cam follower was found worn or melted. New parts were installed and functionally checked good. Engine is a Continental IO-360-A, installed in a Maule M-4-210
Part Total Time: 26.0 hours

Slick 6361 Magneto – Failed Internal Timing
Three hundred and thirty-seven operating hours after it was installed on a Lycoming TIO-540-AJ1A powering a Cessna T206H Stationair, the engine experienced hard starting. Timing to engine was checked and found okay. Magneto was removed and sent for evaluation, which found internal timing out of specification.
Part Total Time: 337.0 hours

ECI Cylinder – Broken Valve Springs
During engine overhaul, the outer intake valve springs on cylinders 1, 3 and 4 were discovered broken into two or three pieces. The engine is a Lycoming O-540-J1A5 installed in a Maule M-5-235C. Based on the appearance of the fracture surface and the wear on the new wear surfaces—the springs had screwed themselves together—these failures were not recent. The cylinder assemblies were new when installed on the engine in 2004.
Part Total Time: 295 hours

Piper PA-46-310P Malibu – Failed Turbocharger Controller(s)
During climb, the pilot reported a loss of turbocharging and cabin pressurization. Troubleshooting revealed the turbo controller had failed. This was the fourth failed turbo controller on this aircraft in 12 months and approximately 165 hours SMOH. (The turbo controller delivered with the engine was found defective during initial engine setup, the second controller failed after a half hour of operation and the third one made it to 55.4 hours.) This controller was again replaced under warranty.
Part Total Time: 110 hours

Slick 4371 Magneto – Faulty Assembly
The Lycoming O-320-D3G engine in this Piper PA-28-151 Warrior became hard to start. Investigation found timing had slipped. Checking internal timing, it was determined the points had closed to the point the spark output was degraded even though the preflight mag check was within limits. On disassembly, both point hold down screws were found loose enough that the point adjustment had changed. The screws were not adequately torqued when the mag was assembled at the factory.
Part Total Time: 426 hours