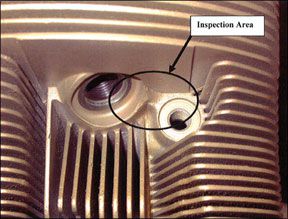 On July 14, 2009, Teledyne Continental Motors (TSM) published the latest revision to its Mandatory Service Bulletin MSB09-1B. In it, TCM states it has determined a tool used to manufacture new TCM-brand cylinders “created an area of reduced thickness” between the upper spark plug bore and the fuel injector/primer nozzle bore “that may result in a crack after prolonged operation.” The MSB includes a list

of affected engine models and engine/cylinder serial numbers dating back to August 2006 that may be affected.

The MSB outlines warranty provisions and cautions that all inspections and work is performed on or before December 31, 2009.

A technician discovered identical failures of six different cylinders-all with zero time in operation. The defect discovered is believed to be head-barrel separation. A compression test with soap and water was performed to confirm the suspected defect. The new cylinders were purchased from ECI for installation on a newly overhauled Lycoming IO-540-K1G5.

Two months later, the same technician submitting the report above discovers identical problems on four new cylinders slated for a different engine. “(This) cylinder has test cell time only. After the test cell run we noticed there was head barrel leakage.”

The four screws holding the rectifier plate into the back case of the alternator came loose and contacted the rotor. This event destroyed the alternator. The alternator was bolted to a Lycoming IO-540 engine. (Presumed Lycoming alternator p/n 32C22491.)

A Cessna 172s Lycoming IO-360-L2A engine failed to start. Upon starter removal, the units through bolts were observed bent. The same operator reports six other starters that have failed in a similar fashion. These problems have been seen only recently; the starters are lasting only a few hours.