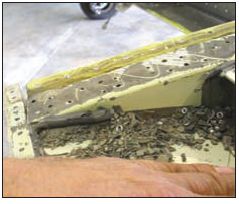 This aircraft has factory-installed, extended range fuel tanks, a “wet wing” design in each wing tip. These tanks were found leaking through the fuel vent tubes (p/n 60-170010) on both sides. The cause of the leak was found to be the deterioration of the sealant around the tube slip-joint fittings.

Present in the tanks was an excessive amount of debris, deteriorated fuel tank sealant. These particles were trapped in multiple locations throughout the entire fuel storage system with no way of detecting their presence.

During a routine inspection, the flap cable (p/n 2660001105) from the inner bell crank to the outer end of the flap was found frayed at the fairlead. About 30 percent of the strands were broken. This cable was original and, judging from the slip mark, the cable had not (moved from its swaged fitting.

While this aircraft was tied down, its control yoke was secured in the full-aft position with a seat belt instead of the approved gust lock device. This allowed the elevators to move and high winds caused the elevator to hammer its lower stop until the bracket’s upper mounts failed. All pre-flight checks were normal. It was not until the control surface incurred air loads that the problem was discovered and the takeoff aborted.

The aircraft’s l/h engine throttle lever stuck at 25 inches of manifold pressure during multiple landing operations. After departing the pattern, the crew was able to reduce power and, on recommendation from ground-based maintenance personnel, secured the engine, declared an emergency and uneventfully performed a single-engine landing.

Although there is no speculation on causes for the cable (p/n 554546) binding, there have been previous reports of problems with engine control cables installed in this make and model aircraft.

The crankshaft (p/n 649859) cracked in the propeller flange at the radius. The crack appeared in a “V” shape. On one side, the crack was about four inches long, and on the other about three inches.