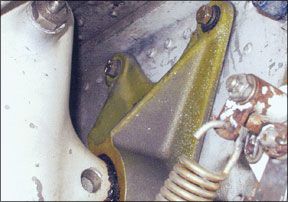 “On final,” states an unidentified submitter, “the student selected 30 degrees flaps; a loud pop was heard, the r/h flap came down to 30 degrees, but there was no movement at the l/h flap. The aircraft landed without incident. Investigation revealed the swaged ball end broke from the remaining cable (p/n 0400107-146).” The submitter suspects high time and cycles as contributing factors to the failure.

A submitter writes, “The autopilot hook-up rod should be tightened up or removed from the aircraft at the factory. This is the second aircraft in one week (in which) this rod (and/or its attachment nuts) has been found loose.” The elevator control bell crank is p/n 002-524024-51.

A technician wrote, “The main landing gear pivot casting (forward trunnion fitting assembly) attach hardware continually comes loose, allowing chafing between the casting and the wing spar, and enlarging the attach bolt holes in (both) the casting and the spar.” The attachment holes in the casting and spar were reamed to accept AN5 bolts rather than the original AN4. The original nut-plates on the forward side of the wing spar (MS21047) do not seem to adequately accept the stresses imposed on them and are likely the leading factor in the continual loosening of the casting. They were replaced with MS21078-5 nut-plates which provide more strength and help prevent the attach bolts from loosening.