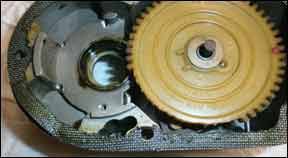 Cessna 402C
Failed Nose Gear Microswitch
The nosegear collapsed on landing. The nosegear actuator was removed and tested in a controlled environment. When the actuator was cold-soaked, the microswitch (p/n 1CH16) failed to activate properly, giving a false indication the gear was down and locked. Due to gear failure, both aircraft propellers struck the ground, causing sudden stoppage to the engines. The aircraft also suffered structural damage to the nose section.
Part Total Time: 352.0 hours

When the removed magneto was disassembled, the distributor gear was found to have failed
Part Total Time: 673.0 hours

Continental S6RSC-25P Magneto
Failed Distributor Gear II
The SR22’s crew reported severe engine vibration during takeoff. Inspection revealed the l/h magneto was inoperative. It was replaced with a new one. Disassembly of the removed magneto (p/n 10-500556-101) found the distributor gear to have failed. The magneto overhaul manual does not include mandatory replacement of the distributor gear. (Ed. note: These two magneto failures occurred on the same airplane, less than two hours apart.)
Part Total Time: 674.0 hours