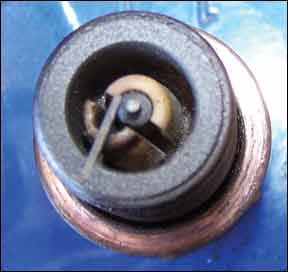 The landing gear would not retract after takeoff, or extend when gear down was selected. The emergency gear extension handle was pulled, but it broke off in the pilot’s hand. The aircraft was landed gear-up. Troubleshooting revealed that the cable broke at the base of the handle.
Part Total Time: 5706 hours

The FAA’s service difficulty reporting system includes numerous recent entries for cracked electrode insulators and high electrical resistance among these spark plugs. In one case involving an IO-550 in a Cirrus SR22, the insulator separated from the spark plug and was ingested by the engine. The problem affects turbocharged and normally aspirated engines installed in several different airframe types.
Part Total Time: Various

After starting the Cirrus SR-20, engine instrumentation became inoperative. Investigation revealed the MAP/fuel-flow indication wiring assembly was charred and burned. The damage was attributed to a defective Sky-Tec starter (model C24ST3) that showed evidence of an internal electrical arc that had burned a hole entirely through its housing.
Part Total Time: 417 hours

On the first run-up of the day for this IO-520-powered Cessna U206F, the pilot noted engine roughness. Inspection revealed the number 5 cylinder (p/n AEC63197, s/n 20356-B) missing several cooling fins and a hole the size of a pencil was discovered in the area of the exhaust port on the top of the cylinder head. After removal, a crack was noted from the exhaust port across the top of the spark plug boss to the injector port and on through the intake port.
The cylinder was not covered under AD 2004-08-10 by serial number.
Part Total Time: 1128 hours

Cessna 182T experienced a failed left main tire inner tube on touchdown and exited the runway without damage. This was the 15th inner tube failure on a fleet in the past 18 months. All tubes exhibited one or two clean ¼-inch cuts on the sidewall. All involved aircraft are G1000-equipped from 2009, 2010 and 2011 model years, with original factory tubes installed.
Part Total Time: 985 hours