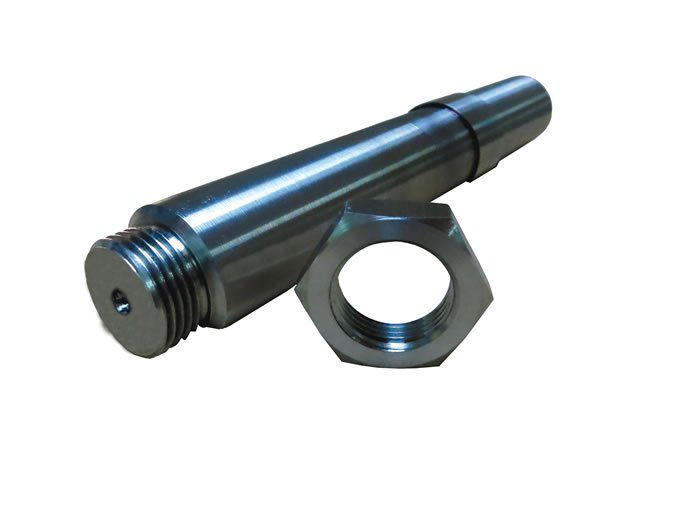 As the aircraft climbed through FL190, the pilot reported a loss of power. An emergency descent was begun and an unscheduled landing was planned. Some power was restored as the airplane descended. On landing, inspection revealed the shaft between the turbocharger compressor and exhaust wheels had broken in two.
Part total time: 243.0 hours

On landing, the left brake pedal rotated forward and there was no braking action. Examination revealed the master cylinder piston shaft had broken at the threads, flush with the end of the clevis fitting.
Part total time: 7764.0 hours

Examining part under 10x magnification reveals machining marks on the threads of the stabilator trim shaft (p/n 65246000), preventing it from threading into the trim barrel. Four shafts are in stock, all have manufacturing date of 3/19/10 and batch number 6641D28J, and all have same defect. A shaft with a different batch number was installed; no defects noted.
Part total time: 0.0 hours

Aircraft landed with no oil pressure; fuselage and windscreen were covered in oil. The prop governor drive gear idler shaft was found in lower engine cowl. The plug covering the shaft access hole was hanging from safety wire. The idler shaft had been rotating and had worn through the inside of the plug. It is suspected the idler shaft setscrew was not installed properly.
Part total time: 1200.0 hours

Light surface corrosion was discovered on the starter/generator shaft at its base, between the spline o-ring and base. Most probable cause of corrosion is water ingression due to imperfect sealing surfaces near cooling air exhaust of starter/generator. Shaft appears to be made of straight carbon steel with no coating or treatment.