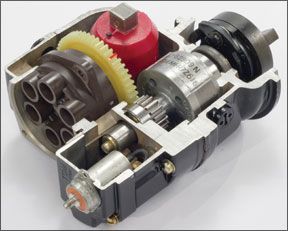 Receiving inspection of a new Cessna leading edge skin (p/n 0523029-4) found it was drilled incorrectly. None of the nose ribs would line up with the rivet holes. The submitter wrote, “This (is) the second time we have received this same part. We have asked for this part not to be put back into Cessna stock since [it] is non-conforming. [It] came with an FAA Form 8130-3 Airworthiness Approval Tag.”

A mechanic states, “These bolts are located at the top of the landing gear. Three

of these bolts hold the spring gear on-all three failed. (I) recommend these (NAS146-35) bolts in both main gear be replaced each 1000 hours of time in service.”

On removing the rudder pedal assembly (p/n 63419-02), a crack was found approximately two inches long, extending out from the center bolt through-hole. Two other assemblies were found cracked in the same area. The submitter speculated the cracks could be caused by steering pressures applied during taxi.

All affected aircraft have more than 10,000 hours total time. The submitter notes, “(I) would suggest arbitrary replacement of this part at or about 10,000 hours.”

Shortly after a new points set had been installed, misfiring occurred. Inspection revealed the plastic portion of the cam follower had melted, causing the misfire.

While starting the left engine, smoke was observed coming from the louvers on the top of the left engine. Inspection revealed the starter and alternator power cables were burned in half near the turbocharger. Fourteen other wires in the same bundle were also burned in half or severely heat damaged.

An electrical fire resulted from the starter cable shorting to ground on the turbo support bracket (p/n 5155101-20). The electrical bundle had been resting on the bracket until it chafed through the wirings insulation.

Required inspection of wooden wing spars in accordance with AD 2000-25-02 revealed a compression crack in the forward spar at the top, outboard of the wing-strut attach doubler plate.