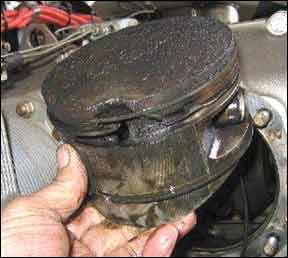 Beech Model 58 Baron Misaligned Aileron Mounting Screws
The right aileron was observed to be misaligned with the wing. Inspection revealed both upper outboard aileron mounting screws were not engaging the hinge nutplates. This allowed the aileron to move aft and down with potential for in-flight separation.
Part Total Time: 3427 hours

Cessna 150G Corroded Horizontal Stabilizer Skins
Heavy corrosion was found at the joint between the left stabilizer skin, (p/n 0432001-55) and the right one (p/n 0432001-54) at the lower center rivet line. Corrosion had eaten away numerous rivets, loosened the skin joint and began to eat away the skin.
Part Total Time: 3317 hours

Cirrus SR20 Improperly Routed Brake Cable
Owner reported right wheel brake was being applied during taxi. Investigation revealed the parking brake cable was routed near the rudder pedal return spring. When rudder was applied, the spring stretched, allowing a gap for the park brake cable to fall into. When the rudder was released, the spring captured the cable, essentially applied that brake.
Part Total Time: 1291 hours

TCM O-470-R Failed Piston
After approximately 300 hours, the #5 cylinder failed, appearing at first to be caused by detonation. The submitter believes, however, failure is due to a manufacturing flaw or damage during transport/installation.
Part Total Time: 300 hours

TCM IO-550-B Failed Fuel Diaphragm
Engine lost power in flight. A precautionary landing was executed but the engine could not be restarted. Investigation revealed an extremely hardened diaphragm in the engine’s flow divider. The diaphragm was so inflexible that the flow divider closed and could not be opened no matter how much fuel pressure was applied to the inlet. The date code on the diaphragm was from 2007. A possible fuel contamination or additive causing a reaction that caused the diaphragm to harden is suspect.
Part Total Time: 690 hours