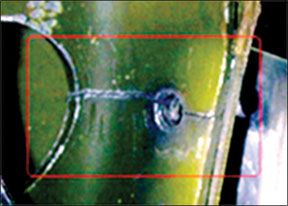 The nose landing gear would not deploy on approach to landing. After nosegear removal, actuator drive shaft (p/n 50-820218) internal spline was discovered worn and sheared. Lubrication maintenance should be consistent to help reduce wear.

During preflight inspection, maintenance technicians noted a 3.75-inch-long crack in the right wing lower wing skin, just forward of the inboard section of the

outboard flap. Additionally, a support/anchor tab that attaches the lower wing skin to the inboard-most flap-well rib of the outboard wing was found cracked through and failed. The tab failure is believed to have allowed the skin to vibrate, generating rapid crack growth. This crack appeared within two hours of flight time (r/h trailing edge lower wing skin, p/n 50-110027-15).

During corrosion inspections, the air conditioning condenser duct clamp was found cutting into the engine mount on the l/h truss, which itself was rubbing against the condenser duct. The clamp was correctly installed, and the part numbers are in accordance with the current parts catalog. Via e-mail, Cessna recommended using aluminum “speed tape” under the clamp to reduce damage to the truss and has not provided an official engineering analysis. This engine mount assembly was replaced. Engine mount p/n 2651023-19.

During the supplementary inspection document (SID) inspection, the fuselage bulkhead at the forward opening of the cabin door and secondary bulkhead were found cracked, buckled and distorted. The SID inspection requires removal of the door bayonet receptacles for inspection, and the removal of the interior sidewall upholstery, which is the only reason these defects were discovered.

Pneumatic control timers (Lamar P/N 488-699) were purchased new. After installation, the surface deice boots inflated continuously when aircraft power was on. A second new timer unit exhibited identical behavior. Troubleshooting revealed the blue and white wires coming out of the device were reversed during manufacture.