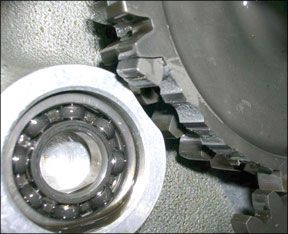 Alternator failed, the third failure in less than 100 hours (other failures occurred at

18 hours and 17 hours). All three suffered identical rotor shaft failure between the fan and inboard bearing.

During normal inspection of the right magneto of a Lycoming IO-540-AB1A5 installed on a Cessna 182T, the distributor brush was found badly worn. Wear is exactly as described in SB3-08, although more extreme, and magneto s/n and manufacturing date are outside the SBs applicability range. The other magneto exhibited more extreme wear signs and also was unaffected by the SB.

During post-maintenance run-up of a Lycoming TIO540AE2A installed in a Piper PA46-350T, the engine locked up. The left magneto was found dislodged from its drive pad and would not rotate by hand. Also found were broken teeth on the camshaft gear. The right magneto was unaffected. With both magnetos removed, the engine would still not rotate by hand. Suspect cause to be failure of left magneto shaft bearing.

During an annual inspection, technicians discovered a 46mm-long crack in the skin on the vertical stabilizers right side. The crack is roughly 55mm from the top of the skin and 250mm forward of its trailing edge.

Manufacturer provided an EASA-approved repair memo to remove the section of cracked skin and install doublers.

Left main landing gear torque link broke about one inch below upper mount after landing. Testing by NTSB revealed fatigue origin areas contained no evidence of gouge or corrosion damage. Fatigue crack extended approximately through 40 percent of the wall on one side and 30 percent on the other.