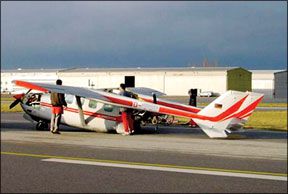 Three articles in your December issue pushed my buttons and prompted me to write. “…none of your business…” is a great commentary. Although I have never been outright verbally abused by a controller, I have many times received short, unhelpful responses from controllers when I asked why I was being climbed and descended all over the airspace.

This most often happens around New York, where the controllers especially dislike GA aircraft on IFR flight plans at any altitude between 7000 and 14,000 feet within 50 miles of JFK. Even deviations to avoid thunderstorms are met with resistance or refusal. While I live in fear of busting an assigned altitude or airspace, ATC near Bravo airspace treats me as an unwanted outsider. For that level of service, user fees are out of the question.

Intervention (“Developing Judgment”) is something more pilots should do. We are told to judge other pilots and have the proximity to witness their bad judgment and outlaw behavior. However, there is a feeling among pilots that its wrong to judge the actions of another or to comment on them, especially to make a public comment.

As a Cirrus pilot, several times I vocalized on the COPA forum about serious instances of substandard piloting. The response was overwhelming condemnation from my fellow pilots; not because the observations were inaccurate, but because it was “wrong to comment.”

Having learned my lesson, if I see a pilot committing a violation, I wont bother

speaking to him. I will, however, send the information along to the FAA.

Thanks for the kudos.

Its unfortunate that a “pack mentality,” especially in some of the more active online forums, can stifle rational discussion of pilots flying habits. Instead of shooting the messenger, I think it would be more productive to engage in thoughtful debate and consideration when examples of pilots behaving badly are brought to light.

To restate a theme recently expressed in these pages, “If we cant police ourselves, it surely will be done for us.”

I just received my first issue of

Aviation Safety. The only problem with your magazine is that I did not subscribe sooner.

I read the issue from front to back and did not skip over any articles. I have never done that with any other magazine. Very informative!

There is a better alternative to the “Not So Tight Turn” (December) and it is not taught in the Commercial or Private curriculum, presumably because it is a semi-aerobatic maneuver. That alternative is the wingover.

The maneuvers and math discussed in your article were all based on a two-dimensional plane, whereas an aircraft lives in a three-dimensional world.

When faced with a tight turn, simply trade an immediate climb for airspeed, start a turn when the aircraft is pitched up sharply, release back pressure on the elevator to unload the wings, push the rudder over to turn the aircraft on a dime, then recover from the nose-down attitude, now headed in the opposite direction.

This turn can be accomplished in a smaller radius than any level turn at any speed with no danger of a stall/spin.

Since stall speed varies with wing loading, there is near-zero G loading when the aircraft is turning in a wingover. Anyone who has been to an airshow and seen a hammerhead turn knows the technique works.

When faced with a sudden realization that a reversal is required, it is much easier and faster to pull up and turn simultaneously than to slow down, dirty up and turn. That is three-dimensional flying!

Best regards and keep up the great publication.

Youre right, of course. Taking advantage of the third dimension in which the airplane is operating can bring numerous benefits, not least of which short of performing a “real” wingover is to dramatically slow the airplane, thereby accomplishing the objective: a much smaller turn radius.

Ive often wondered what would have happened if Lidle or his instructor had executed a pull-up at the same time they reduced power, thereby decelerating and sharply reducing their turn radius. They may have entered the overlying Bravo airspace inadvertently, but Ill take that any day when compared to the alternative.

Regarding your recent ATC handling (“…none of your business…,” December 2006): A few weeks ago, I overheard a controller politely help out a student, in part, by asking her to navigate to the Casanova VOR (CSN) and and gave CSNs frequency as 133.6. Of course, no VOR uses 133.6, which I told the controller. Then I looked it up and gave him the correct frequency. He said his database had 133.6 and appreciated the correction. And when I left the ADIZ and he terminated service he again thanked me for helping out.

The pilots instructor, whom I know personally, told me there is more to the story than I heard and she has filed a request for the tape under the Freedom of Information Act (FOIA).

She pointed out an FAA Web site

Thanks for the tip, Herb. That site gives a good overview of the FAAs FOIA process and how to contact the various responsible offices. Of course, one sometimes needs to go directly to the ATC facility to begin or modify the process.

Let There Be Lights

The night before the Piper Saratoga discussed in Decembers issue (Accident Probe, “X Marks The Spot”) crashed, I was returning to Santa Barbara from Las Vegas. We were IFR on V12 at 10,000 feet on an almost moonless night, a trip I have flown frequently. My passenger, a high-time pilot, was in the right seat. Santa Barbara is easily identified by the city lights that, at night, almost pop out on the lower horizon as the flight clears the last 4400-foot ridgeline.

At around 20 miles east of the San Marcos VOR (RZS), my passenger said, “I see the lights.” I was immediately ready to request lower, but something didnt seem right. Double checking our position, it was obvious these lights could not be Santa Barbara yet there they were!

Had I been flying VFR, I am sure I would have begun a descent without realizing the “city lights” we both thought were Santa Barbara were, in fact, a fleet of brightly lit boats, fishing for squid along the north side of Santa Cruz Island, exactly 30 miles offshore.

It took us a couple of minutes before we both realized our mistake. My co-pilot remarked, “Boy, there are a lot of gotchas in this business, and that is certainly one of them.”

No one can say with certainty this is what happened to the Saratogas pilot, but if two multi-thousand hour IFR pilots can be fooled, a low-time pilot, flying VFR at night, is a good candidate to have bought into the illusion created that night.