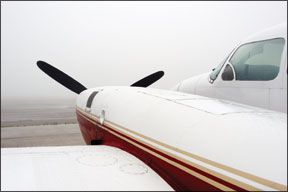 On the early morning (oh-dark-thirty) ride to the airport, I could make out glimpses of the moon through a occasional break in the fog. I did a thorough preflight and powered up to launch. At approximately 35 knots, I lost sight of the runway environment entirely.

I decided continuing the takeoff was a better choice than trying to abort and rotated the Skyhawk on the gauges at the proper speed. Completely losing sight of the runway before launch is a factor that should be added to previously mentioned considerations in the decision to go or not.

I think youve beat this subject pretty much to death; however, I thought I would add one final tip for whatever its worth. Having flown in and out of Nantucket, Mass., (ACK) hundreds of times, I certainly have flown my share of zero-zero takeoffs. In fact, this airport served as the fog-training HQ for Europe-bound flyers during WWII.

Some years back, a local 737 captain shared with me a tip which, though seemingly obvious, can be a real lifesaver in all circumstances of close-to-the-ground IMC flying. His suggestion is to place your turn coordinator or turn-and-bank indicator into your primary scan. This helps ensure your attitude indicator is in agreement bankwise. Simple, but so important.

When the zero-zero takeoff is considered, its often presumed certain portions of the runway environment remain visible; the centerline, for example, and/or runway edge lighting. Usually, this is the case, at least until liftoff and the fog or other obscuring phenomena preclude seeing even these cues. One of the things for which all pilots contemplating such a takeoff must prepare, however, is loss of all visual cues during the takeoff roll.

Another thing we should be doing is using all the tools available to us during the takeoff itself. This includes using the heading indicator to maintain heading, and the turn coordinator/turn-and-bank indicator to identify any tendency toward a heading change.

Patterns Of Confusion I

As a former Designated Pilot Examiner (DPE) and a current ground school instructor, I refer to non-FAA sources very rarely, but the most frequent non-FAA source I use is Aviation Safety. That is because AS refers to FAA so much it should be required that pilots subscribe to it to be eligible to take a flight review!

Your rendition of the Aeronautical Information Manual (AIM)

traffic pattern diagram found in Figure 4-3-2 of that document is misleading in one subtle way: The leg labeled “upwind” initially and then “departure” where the aircraft are depicted leaving the traffic pattern. Both AIM diagrams, 4-3-2 (single runway) and more clearly 4-3-3 (parallel runways) describe the leg from the moment of lifting off the runway surface and continuing on the extended runway centerline as “departure.” Figure 4-3-1 (components of a traffic pattern) and the associated terminology show that the upwind leg is “a flightpath parallel to the landing runway in the direction of landing” and is not necessarily associated with the runway centerline.

Keep up the great work!

I just read Frank Bowlins article “Traffic Patterns.” Maybe he should take one of his tips and smack his CFI “over the head with a rolled-up sectional.”

The diagram provided with the article incorrectly identifies part of the departure leg as the upwind leg. Ask Franks CFI to review AIM Chapter 4 Section 3, Airport Operations. Ask him to pay particular attention to 4-3-2c where hell find descriptions of the departure and upwind legs, and figures 4-3-1 and 4-3-2, the traffic pattern diagrams which he should have shown to

Thanks! I enjoy the magazine.

The mislabeled pattern diagram is reproduced on page 3; a corrected version is printed below. In this case, a production error resulted in the mislabeling; the articles author is blameless.

The article on preparing for night flying, “Night School” (January 2010), discussed how to find lighted fields on sectional charts. Another valuable piece of info on sectionals often overlooked when considering night operations is the maximum elevation figure (MEF) printed within each lat/long grid box. They are a very simple (and inexpensive) way to make sure a planned en route altitude doesnt conflict with granite reality. While they are not absolute-towers, etc., may have been erected since the charts publication, for example-Id recommend verifying terrain clearance before planning an altitude below an en route MEF.

Thanks for another good issue!

I disagree with the reader suggesting to “retract approach flaps to reduce drag” as one of the three things to do in the first six seconds of a go-around, unless he meant retracting them to the approach-flap setting (Unicom, December 2009).

Approach flaps typically do not add a lot of drag but reduce stalling speed considerably. In a Mooney Ovation, typically all landings are done with full flaps and trim is set to max nose-up. Retracting flaps to the approach setting would result in an airplane way out of trim. Landing gear retraction has a much greater effect in reducing drag.

As we read the writers comment, he suggested fully retracting approach flaps during the first few seconds of a go-around. This is a topic deserving detailed treatment in a larger article; watch for it soon.