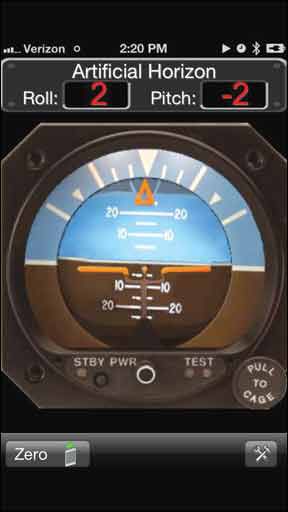 Great article on cockpit gadgets (“Gadget Flight Rules,” February 2013) and I especially like “GFR”— I think that might stick.

Could you please share the details of the mounting device you’re using for the iPad in the photo on page 19?
Thanks!

Mike Hart, that article’s author, responds, “Whether the term GFR sticks is an open question, but flying with gadgets is here to stay, thanks to a new crop of them announced and hitting the streets each month, capable of outperforming and overcoming many of the weaknesses of their predecessors mentioned in my article.

In terms of the mounting system for my iPad, I use the RAM mount system, www.rammount.com. I like the system because it has many modules that create ball-and-socket attachment points that can be moved until you find the sweet spot for the particular gadget.

Gadget Legality?
The “Gadget Flight Rules” article, which I read while sitting in coach on an airliner flight, had a lot of good information in it. Ironically, I read it during a portion of the flight when the crew required passengers to turn off all our portable devices.

Which raises the question: What’s the legality of using phones and tablets aboard small aircraft?

Good question, the answer for which isn’t hard to find. First, we’ll refer you to FAR 91.21, Portable electronic devices, which starts out with a blanket prohibition against using PEDs aboard aircraft operated under an air carrier or operating certificate, or under IFR. So, right away, using a PED while VFR under Part 91 isn’t a problem.

The same FAR then says it does not apply to specific items or “any other portable electronic device that the operator of the aircraft has determined will not cause interference with the navigation or communication system.” For non-commercial IFR operations, the pilot in command makes the determination.
That’s the legal side. For additional guidance, see Advisory Circular AC 91-21.1B, Use of Portable Electronic Devices Aboard Aircraft, and AC 91-78, Use of Class 1 or Class 2 Electronic Flight Bag (EFB).

Pre-flight errors
The “Top Five Pre-flight Mistakes” article (May 2013) was very good, but I cannot help but thinking you missed one. Top on my list is “Not doing a pre-flight.” I have seen this happen several times.

One event that stays in my mind is an instructor who once told me, “That’s okay, we don’t have to preflight the plane. I flew it yesterday.”

Your Top Five list is excellent (I admit that I have done the gas checks incorrectly, possibly from day one) but none of them help if you don’t perform a pre-flight in the first place.

Night Ops
The recent article, “No Electrics? No Problem!” mentions on page 19, “…with no electrical, you will need to be on the ground before the end of civil twilight.” I may be mistaken but without lights, FAR 91.209 mandates you be finished by sunset. Please clarify this for me.

You’re not mistaken; we were wrong. As you correctly point out, FAR 91.209 states, in part, “No person may…[d]uring the period from sunset to sunrise…[o]perate an aircraft unless it has lighted position lights.” Meanwhile, FAR 1.1 defines “night” as “…the time between the end of evening civil twilight and the beginning of morning civil twilight, as published in the Air Almanac, converted to local time.”

We obviously confused the two. The offending editor has been sentenced to revising all of the night-time entries in our logbooks.