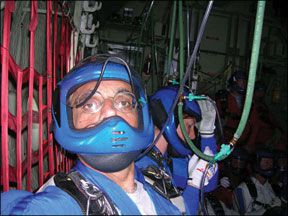 My observation is that recognition of the symptoms is the critical thing, not how long they take to become recognizable. Also, using the term “denial” for failing to

take appropriate action after the onset of hypoxia is to my mind non-productive. Mr. Bertorelli uses a better term himself when he describes a “state of hypoxic stupidity.”

Let me illustrate from my own experience. Some time ago, I was flying a T-33 on a night cross-country flight. I had just leveled off at 30,000 feet with a cabin altitude of about 19,000 feet. This early T-33 had some instruments with fluorescent dials and we had a couple of ultra-violet lights to excite them to fluoresce. Spilled hydraulic fluid would also fluoresce and my first hypoxic symptom was fuzzy instruments, which I blamed on spilled fluid.

I then noticed my peripheral vision seemed reduced. I do remember my thoughts at this time: “Hmmm, this is just like I have hypoxia.” Denial? No-a classic state of hypoxic stupidity.

I continued flying for a little while and then thought, “Maybe I do have hypoxia.” Continuing with my hypoxic stupidity, I slowly came to the conclusion that perhaps I should do something. So I reached down to my left and turned the A-14 regulator to “Pressure.” This flooded the cockpit with oxygen and this started to improve my thinking. I then realized that I could not feel any pressure in my oxygen mask. This was my clue the mask hose had become disconnected.

As noted above, I feel there was no denial here, just hypoxic stupidity. Once hypoxia develops, clear thinking is not likely. I further feel that hypoxic stupidity should be emphasized in all hypoxia training and re-training.

Mr. Bertorelli and I agree that hypoxia can easily be fatal and is so unnecessary. We also agree that attempting to get by on low amounts of oxygen consumed is a dangerous method to save a dollar or two.

Tom Turners article on icing (“On A Mission: Managing Ice,” December) was very informative, quoting obviously experienced and cautious Great Lakes operators (the ice capital of the U.S.). The last sentence is inconsistent with the other advice in the article, though, and could lead a pilot into trouble: “to increase your icing knowledge…fly in potential icing conditions.”

I am sure this was a poorly constructed sentence and not real advice. It might be worth clarifying.

Yikes! Good catch. That sentence should have read, “To increase your icing knowledge, take the advice of pilots on a mission regarding ways to fly in potential icing conditions.”

I read your interview with NTSB Vice Chairman Robert Sumwalt with interest. Mr. Sumwalt admonished all of us in the aviation community to consider ways to tackle training, judgment and decision-making issues (“Improving GA Safety,” November). While I am a relatively new private pilot, I have already spotted what I think is an interesting and potentially useful trend.

The pilots I know tend to drive like they fly. My bet is the cautious pilot is the one who doesnt tailgate, doesnt get angry when another driver does something dangerous/stupid, doesnt talk on the cellphone while driving, always has a Plan B, etc.

The FAA, recognizing a link exists between behavior on the highway and in the air, long ago tied its medical certificates to vehicular infractions like speeding and reckless driving, as well as to other, more serious crimes like driving under the influence. We wouldnt be at all surprised to see more formal linkage in the future.