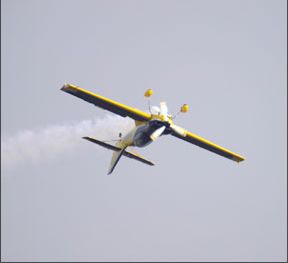 Unusual Recoveries, June 2007; Unusual Recoveries II, July 2007) should be required reading for all CFIs. His analysis of the different spin recovery techniques was very well done. I have been instructing in aviation for 30+ years, both civilian and military, and it always amazes me how very experienced aviators know little about the dynamics of spins.

One of my USAF students in T-37s had over 4000 hours and held both an ATP and CFII. He did very well until we got to spins. He didnt understand them and was terrified of them. It wasnt until the end of his T-37 training that he was finally able to master a spin recovery. The key was stopping what caused the spin in the first place: the yaw and stall. Thats what the NASA standard recovery does.

Its very important to realize each airplane is going to react differently to recovery techniques. The neutral recovery and the hands-off recovery work okay for many certificated aircraft. However, we have a lot of Experimental aircraft showing up in the inventory; those two recoveries may not work on that nice composite single engine you just built. Chances are very good that the NASA Standard recovery will.

I would encourage everyone out there to teach it as the basic spin recovery technique. Spins can be a lot of fun when entered intentionally in the proper airplane at the proper altitude. They can be terrifying entered inadvertently at a low altitude.

You want a recovery technique that will work most of the time in the shortest amount of time. Thats the NASA Standard in my book.

Author Paul Logue responds to an earlier letter to the editor:

“I have received positive feedback from my article,

Of course, stall speed increases with the square root of the load factor. This equation is the basis for the V-g diagrams of our airplanes at gross weight. For the purposes of this article, if you feel better using an approximate sign rather than an equal sign, please do.

In our early training, we are constantly reminded that exceeding the wings critical angle of attack causes a stall. This is true, but what we fail to emphasize early on is the link between load factor and stall speed, plus their relationship to exceeding the wings critical angle of attack. In practical situations, our failure can cause loss of control of an airplane. In other words, increasing the load factor increases stall speed.

Regarding the readers canyon-flying experiences, theres no question this is one of those practical situations where a pilot can get into trouble quickly if he/she does not understand the relationship between load factor and unaccelerated stall speed.

In this regard, canyon flying can be exceedingly dangerous because there is a need to fly as slowly as practical to minimize turn radii. Slower speeds dictates shallower banked turns. Steep banks in canyons can easily cause disorientation stemming from lack of a good horizon references.

Learning to fly around and at the limits of an airplanes operating envelope requires some discipline and adhering to some simple rules. The bottom line here is that, in the interest of safety, be aware of your speed in high-G flight. Without proper instrumentation, you cant see your angle of attack, but you can see the airspeed information and you can feel the wing buffet.

Flight Plannings New Age, July 2007) and could not agree more.

My calls to the local briefers used to be part of my routine go/no go decision making process. They were a critical part of my resource portfolio, complementing the full range of information available to me. The weather I receive over the Internet and from various others sources is always great, but in less than clear-cut situations, I always found a call to the local AFSS to combine their experience with mine and all the other available information to be invaluable in making better go/no-go decisions.

On a flight in late March, I experienced first-hand Lockheed Martins “services.” The briefer could not have been nicer, but even after several attempts to explain my route of flight, he kept giving me information pertinent only several states south of my planned flight. He clearly did not understand the unique conditions over my proposed route. I was left that day only with my own experience and information from the various Web sites I use routinely. With late-March winter weather marching across Michigan, Ontario, New York and New England, I sure could have used my local briefers unique knowledge and understanding.

As a result of the FAA allowing Lockheed Martin to get away with its poorly done consolidation, I have lost a valuable information resource. The briefer may have been a nice person, but that does not help me much when my safety is on the line.

No Accounting For Taste

As an amateur chef and a materials engineer with a welding background, I gotta jump on you for an item in Junes

Squawk Box: “…the drive gear was attached to the shaft by braising….” A tasty item, indeed. Of course, you would be brazing the gear to the shaft when attaching soft (bronze or brass) metals together.

An unrelated point, but also in the “materials science” category: It seems TCMs S6LSC magnetos have a “plastics problem” (third and fifth entries that month). I am all for using engineering plastics where they have a demonstrated weight-saving or performance advantage, but “cam follower plastic had melted” and “Rotorcraft harmonics may place additional stress on the nylon gear” tells me the manufacturer is trying to cut costs the wrong way.