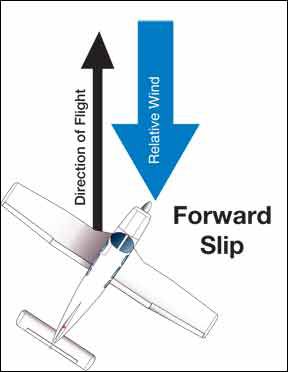 In addition to the benefits mentioned in Tom Turner’s article (“Slips…Who Needs ‘Em?” December 2011), there is another very important benefit you can get from the maneuver. First, use the rudder to keep the airplane aligned with the runway. Second, vary the bank angle into the crosswind to help keep the airplane on glidepath.

I never do a wheel landing in strong, gusty crosswind: You can plant the airplane on the ground with enough speed to make a straight path down the runway, but you have to let the tail down sooner or later. You could find yourself between the rock and the hard place when you find you don’t have enough rudder authority to keep from ground looping or enough airspeed/remaining runway to go around and try again somewhere else.

And Still More
Great article on slips by Tom Turner. I, too, was a little baffled in seeing the FAA’s Airplane Flying Handbook showing a forward slip and a side slip the same way other than printing orientation. The graphics correctly depict slipping to lose altitude by increasing drag. I realized the graphics did not apply to crosswind landings as the graphics do not show ground track, they show the effect of slips in relation to the relative wind and direction of flight.

As we all know, in a crosswind landing, right before touch down we are not interested in increasing drag, but rather flying an airplane with its longitudinal axis parallel to the runway (and hopefully over the centerline). None of the graphics show the effect of a slip while landing in a crosswind since the “real” wind is not shown.

Winter Tips
Great article on winter flying (“Winter Flying Lessons,” January 2012)! One additional trick: Put some hot oil in the cold engine.  Works best if you were able to draw out oil while it was hot at the end of the prior flight. Keep it at home, warm it up and save lots of time on getting the engine oil warm.

Risk Management
The best way to learn risk management and mitigation comes from reading as many full-detailed accident reports as you can. Each edition of Transport Canada’s quarterly Aviation Safety Letter since 1973 is prefaced by this axiom: “Learn from the mistakes of others; you’ll not live long enough to make them all yourself.”