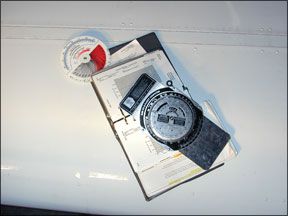 Must saw your reply to my e-mail about dead reckoning on the back page of the November issue. Avoiding controversy is one thing, but getting it right is another.

What I got out of the etymological research regarding dead reckoning was that before WWII there was no controversy over this term. With only a few abbreviations in ships logs to the contrary, “dead” was widely used in marine navigation (since the 17th century) and in the early days of aviation. The researcher claims to have examined hundreds of old books to come to this

conclusion. It was only after the attack of the amateur folk etymologists starting in the 1940s that it even became an issue, and the battle has raged since. (And Barry Schiff has fallen prey to this, too.)

The crux of the matter is, of course, the meaning of the word “dead.” The meaning that I had always heard was that “dead” in this case meant “precise,” “exact,” “accurate,” etc., and had nothing to do with death or stillness. (Dead as in “dead right,” or the “dead of winter” (middle or center of), or “dead on,” or “dead ahead,” or the original character of “Deadeye Dick” (the accurate marksman, not Dick Cheney).

It is interesting to note that the rest of the English speaking world has not yet come to the height of this controversy. It seems only to be in America that we have fallen for the folk etymology.

Consequently, when we navigate without reference to landmarks (or logs in the water) we are navigating by “Precise Calculation” for which many of us use the ancient term, “Dead Reckoning.”

Thanks for listening! Shall we tackle the downwind turn canard next?

What? Theres an issue with downwind turns?

Tom Turners article, “O2 Realities” (October 2008) is a very good reminder of the ever-present danger of altitude-induced hypoxia. There are, however, a number of items in the article needing clarification.

The oxygen in our blood is bound to hemoglobin and dissolved in the blood. “Oxygen saturation” refers to the percentage of oxygen-bound hemoglobin. “Oxygen capacity” represents the maximum amount of oxygen that can be combined with hemoglobin. In a healthy individual, this is roughly 21 ml of oxygen/100 ml blood. “Oxygen content” refers to the total amount of oxygen in the blood, both bound and dissolved, and ranges from 16-22 ml of oxygen/100 ml of blood.

As can be seen, the majority of blood oxygen is bound to hemoglobin, with the

dissolved oxygen representing only about 0.3 ml of oxygen / 100ml of blood.

“Capacity oxygen flow,” a term used in the article, is not a physiologic variable. As an anesthesiologist, I can assure you that we closely monitor our patients oxygen saturation. When oxygen saturation suffers intraoperatively, we do not stop the operation. Instead, we take advantage of the alveolar gas equation and other physiologic principles and improve the patients condition. We do not “stop operations when the blood-oxygen content drops below 90 percent.”

Hyperventilation is mentioned a few times in the article. First, as per the alveolar gas equation above, when an individual hyperventilates, PAO2 increases. As indicated above, oxygen flows down its concentration gradient from the alveolus into the blood. Therefore, an increase in PAO2 translates into an increase in blood-oxygen content. Hyperventilation does not cause a “falsely high pulse oximeter reading.”

Tom Turner responds: “The points I made in the article were based on interviews with several leading aeromedical examiners, as I obviously am not a physician. Although I dont have the personal qualifications to specifically address your comments from a medical standpoint, Ive reviewed my notes and offer this response.

I think were in agreement that there is no way to “artificially” increase oxygen saturation, by heavy or rapid breathing, etc. Thats one of the points I hoped to make-that although there is significant internet chatter about rapid breathing as a way of increasing oxygen intake (with or without supplemental oxygen), it is not an effective technique and in fact has some potential adverse effects for the pilot as well.

Thank you for explaining the difference between oxygen capacity and saturation. All my comments in the article refer to saturation as measured by a pulse oximeter.

The comment about stopping a surgical procedure when O2 saturation falls below a certain percentage was a direct quote from a practicing neurosurgeon.

I appreciate your efforts to make this clearer for our readers. Thank you for writing, and for reading Aviation Safety.”

Your article on airspeed control (“An Airspeed For All Occasions,” December 2008) could be summed up by one of its sentences: “The idea is to make these power-and-pitch changes as much instinct, muscle memory and tactile feedback as possible.”

This is otherwise known as “seat-of-the-pants” flying, which has served me well for over 40 years. Another example of when all is said and done, much more is said than done.