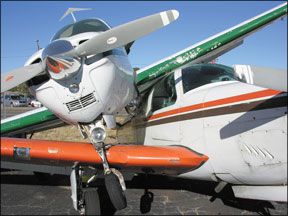 Well guys, if theres an aviation subject, other than lean-of-peak EGT, guaranteed to generate a multitude of conflicting opinions, traffic patterns and entries at non-towered airports certainly qualify (Unicom, July). You are to be commended for your bravery in taking it on!

Unfortunately, and like so many other aspects of aviation, there is seldom a “one size fits all” situation. As Im sure you are well aware, there is that faction who believe straight-in-approaches are blatantly illegal at non-towered airports. Then there is another group who will blunder straight in regardless of how many aircraft are in the pattern.

As always, good judgment must prevail and, unfortunately, there seem to be those few who are totally immune to learning or exercising same! One advantage to the 45 is that it allows you to break off the entry safely if there doesnt seem to be an adequate interval within which to fit, make a 360 away from the airport and try again.

Keep up the good work!

In The Third Dimension

Youll probably get a ton of replies to Julys pattern-entry discussion. Heres mine: Coming from 220 to 140 inbound, maneuvering and then entering a straight-in can interrupt the flow of other entries. Maybe better to do what I was taught some 1500 hours ago when landing at very busy northeastern non-towered fields: Coming from the SW to SE, fly to and over the center of the landing runway at 1000 feet above pattern altitude, announcing location and intentions all the way. After crossing, fly 045 for one full minute or longer to fit into traffic. Make a 180-degree left descending turn, timed to arrive at pattern altitude just after the heading is reversed, to 225. Thats the 45-degree entry on the north side, exactly where you belong. And keep announcing.

To us, the main advantage to the 45-degree entry from downwind is visibility: From the 45, pilots entering the pattern can more easily spot other aircraft, both ahead of and behind them. Too, “entering on the 45” is readily understood by others listening for your CTAF broadcasts, if any, and is the number-one place to look for potential traffic conflicts.

Overflying the airport above the pattern before entering it affords some benefits. Among them is enhanced conspicuity-other aircraft dont have to pick you out of the ground clutter. It also can better allow you to spot traffic and fit yourself into the flow. An exception can be when planning to execute a military-style overhead pattern-and were not

even going to go there in this discussion.

However, using the third dimension in and near the pattern is, for us, fraught with uncertainties stemming from the idea of descending onto someone, or them doing it to us. When approaching a non-towered airport at which we intend to land, we prefer to get to pattern altitude before reaching five miles out. When approaching the airport and attempting to enter the pattern from an inconvenient direction, we try to do the initial maneuvering necessary to position us for the 45-degree entry while descending from cruise and remaining outside that five-mile circle.

Once were in that close, we like to be at pattern altitude.

When departing, of course, well readily climb through the pattern altitude while still within five miles. Adopting those “procedures” have helped us ensure separation at a wide variety of airports.

In response to your July editorial on the loss of Air France Flight 447, I have worked in the weather radar arm of the avionics industry for several decades, and I have seen a generally growing disdain for the skills required to operate an airborne weather radar in any kind of serious weather environment.

The problem is our cockpits are lined wall-to-wall with digital devices requiring no skill or subjective interpretation. The current breed of pilots have little knowledge of weather radar and care even less. So when a large transport encounters a monster thunderstorm largely filled with radar-transparent ice under dark night conditions, it is hardly surprising that the crew will be caught by surprise by the well-known “tilt trap.”

Its still way early to know with any certainty what went on in AFR447s cockpit. But its not too early to ask: What on Earth were they apparently doing in that convective weather? Why didnt they deviate around it, like the three other flights in the area at that time-including another Air France Airbus-chose to do?

On July 2, Frances NTSB equivalent issued a preliminary report on the crash, which merely summarized-without analysis or conclusions-known facts surrounding the tragedy. See page 2 for a discussion of the report, what it contained and, more importantly, what it didnt contain.

The NTSB on July 9 issued its long-awaited finding of probable cause in the September 3, 2007, crash that claimed Steve Fossett, who was flying a 180-hp Bellanca Super Decathlon. The NTSB said the crash was caused by Fossetts “inadvertent encounter with downdrafts that exceeded the climb capability of the airplane.”

I couldnt help thinking about past statements your editor has made cautioning about flying long distances, especially over mountainous or unfriendly terrain, in relatively low-powered airplanes.

Since it appears the Fossett accident is related, any tips for those of us who cant afford to upgrade to something with more “oomph?”

In its investigation of Fossetts accident, the NTSB found “moderate turbulence and downdrafts of at least 400 feet per minute probably occurred at the time and in the area of the accident. The magnitude of the downdrafts likely exceeded the climb capability of the airplane, which, at a density altitude of 13,000 feet, was about 300 feet per minute.”

Despite his experience, it appears Fossett flew the airplane, above, into a situation he couldnt escape. Well plan a detailed discussion of mountain flyings dos and donts in an upcoming issue.