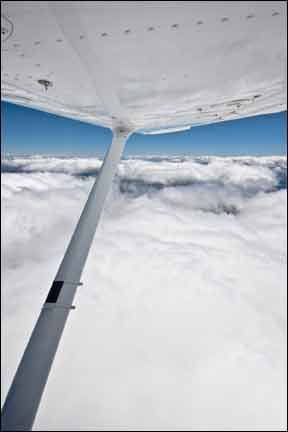 While Dave Higdon’s comment in his article “Blue-Sky Briefings” (March 2012)  on “how and why any pilot would fly without a weather briefing defies logic” is self-evident, I would take issue with what I find to be a very counterproductive attitude on the part of numerous briefers over the years. I fly VFR frequently in the western U.S., and, unless it is severe clear, most briefings are prefaced by a standard admonition that “VFR is not recommended” (usually due to mountain obscuration) before the actual briefing has begun.

When the briefing is completed and it seems clear to me that VFR is certainly reasonable and safe, I’m made to feel like an idiot when I proceed to file VFR after I’ve just been given a host of reasons not to do so. The emphasis on the briefings is frequently heavily weighted toward the negative; perhaps the standard admonition is routinely given if only to protect the briefer’s backside. In 45 years, I have never heard “VFR not recommended” from a Canadian briefer.

Spare Air?
Mr. Werbin, like many others, has bought into the comfort of “Spare Air” (Unicom, July 2012) as a little insurance during a ditching. While I don’t think this is a “bad” idea or product, per se, I don’t think pilots who carry them have typically thought out the scenario where they might be valuable. The details might lead you to not take so much comfort in having those little yellow bottles around, and even question whether they “improve one’s chances,” as Mr. Werbin says.

First of all, ditchings are very survivable. Unless the surface is really snotty, or you just don’t understand the technique, you’ll be fine. In fact, as I’ve said previously, water can be a great place for an emergency landing. No fire, for one thing. Give me flat water over trees any day.

There are many reasons you might not want to bother with these devices. Are they secure enough to not be flying around in the cabin during a ditching? When are you going to use them, assuming your pax have been instructed and can do it? Is your default assumption that you are going to have problems getting out of the plane and that it is going to be sinking with you trapped in it? If you have not worked out your egress beforehand, the chances of you doing it underwater, upside down, in a panic (not to mention with four other people flailing around) are pretty slim.

How about kids? What if one person can’t find their air? Are they going to calmly buddy-breathe with another pax? Not likely. How much time do you really think you’re going to have to decide you need the air, make sure everyone is on theirs, work out how to get everyone out (no talking underwater!), get a door or window open (no weight or leverage underwater),  get everyone out and to the surface? The chances of a situation developing where a little scuba bottle offers more pluses than minuses are very low.

Teach your right seat pax to open the door and what to put in it to keep it open. Teach your back seat pax how to open a door near them or to egress through the front door. If you do the ditching right, everyone will have plenty of time. A minute is a long time.

As a former Navy SEAL, it has always amazed me how people oversimplify the use of scuba and what you can actually do underwater, even with training.

I fly over the ocean here in Hawaii all the time and would not have a Spare Air in my Bonanza. I want my pax to focus on the overwater briefing and not take it lightly because they have a little scuba bottle available. I don’t want my pax trying to find their bottle and get it on when they should be executing the egress I brief for, and I really don’t want those things flying around the cockpit in a violent ditching (and they all are).
Brian Barbata
Hawaii

Penetrating Turbulence
I tried to follow Dave Higdon’s advice to “slow the airplane to a speed which is no more than half the stall speed” (“Handling Turbulence,” July 2012) but found my Cardinal RG stalled every time. It simply refuses to stay in the air at 28 KIAS no matter what I do.

It does taxi well at that speed, and on days when moderate or greater turbulence is expected, I will make sure I do not fly faster than half the stall speed, and thereby keep my wheels firmly on the ground, as Dave appears to recommend.
Joseph Lee Matalon
Via e-mail

Your July 2012 issue, on page 29, says “So, if we slow the airplane to a speed which is no more than half the stall speed…we’ll never subject…to more than its limit load factor….” That is actually so, until you hit the ground in the fully developed stall you’ll be in.

(I know the author meant “no more than double”—I just couldn’t resist.) Keep up the good work!
Ken Kokjer
Via e-mail

Everybody’s a comedian. Seriously, thanks to you both for pointing out this problem, which entered Dave’s article through the editing process.

Upgrading to ADS-B
As I contemplate upgrading my airplane to comply with new requirements, Amy Laboda’s article on installing ADS-B (“Living With ADS-B,” July 2012) was helpful. But one thing it highlighted is that avionics manufacturers seem to be taking a “wait-and-see” attitude when it comes to TSO’d equipment.

Those of us who are happy with our avionics don’t have too many choices right now, short of spending megabucks to upgrade everything. Hopefully, that will change in the very near future.
Mike Stevens
Via e-mail