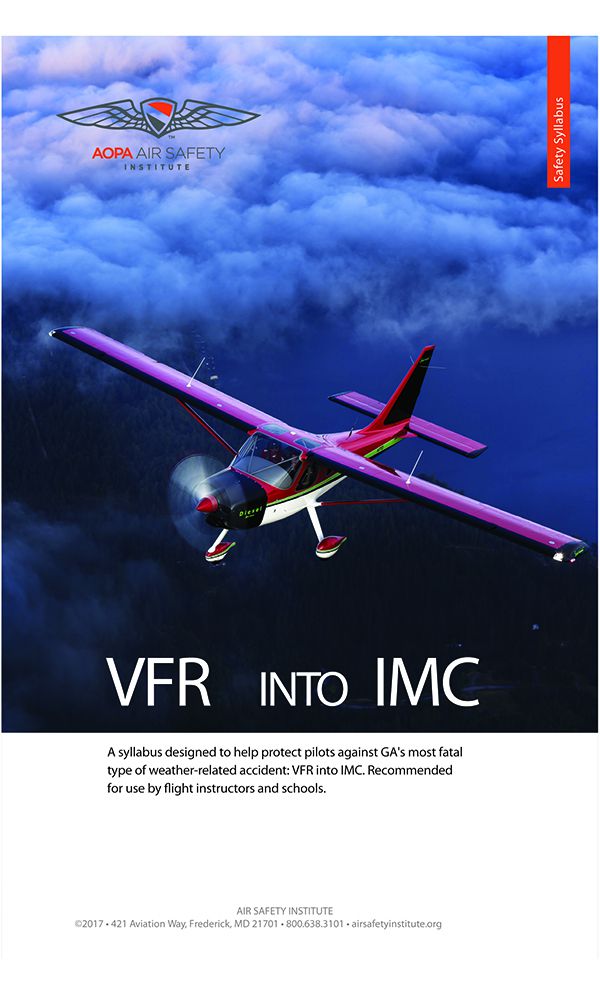 I was struck by what I believe was an omission in the commentary in “Real-World VFR into IMC” (February 2021). Prior to my instrument rating, the procedure upon entering IMC I had committed to memory was a variation of aviate, navigate and communicate: Trust instruments completely, turn 180 degrees while maintaining level flight to get out of IMC, declare an emergency. That third step was even an oral exam question for my PPL. (Question: Is it an emergency if you inadvertently fly into IMC? Answer: Yes.)

Neither of the VFR pilots in the article completed steps 2 or 3, though the commentary focuses on step 2. The “VFR-only Private Pilot” would have benefited greatly from declaring an emergency to the controller putting him through the clouds as soon as it technically was one. Based on his account, that NASA report was quite nearly an NTSB one.

Thanks for putting together such a great magazine!

Thanks, Adam. We, too, were intrigued that the 180-degree turn back to known better weather was not the first considered action these pilots took. That’s certainly the way we were trained and it’s been an integral part of FAA guidance and doctrine for as long as we can remember. It seems, also, that declaring an emergency still carries a paperwork stigma and is to be avoided. What we don’t know, of course, is how many similar events were resolved by executing the 180-degree turn. We don’t know because the pilots didn’t feel the need to file an ASRS report. And that’s probably a good thing.

I’m just catching up on the January 2021 issue and the article “Rust, Reality and Risk.” Though alluded to in the comment about flying with a safety pilot while under the hood, another alternative for the rusty pilot flying alone or with an instructor is to recruit a second pilot for the right seat as another set of eyes when the instructor isn’t available.

At my flying club, we encourage pilots who haven’t flown in a while to seek out a copilot. There is never a shortage of volunteers, and almost always, both pilots learn from the experience.

We agree 100 percent. We’ve usually benefited from having another pilot in the cockpit, especially when we might be a little shaky, for any number of reasons. One key to making this work is a clear understanding of who’s in charge and saving any detailed critiques for when you’re both back in the pilot lounge. The other is to ensure there’s a positive exchange of controls, if needed.

Just finished the April edition and as expected, found it full of good information. Your article, “The Go/No-Go Decision,” reminded me of my private check ride many decades ago. During the oral portion, the DPE gave me the expected question, “Is the runway long enough to take off given these conditions?” I dutifully crunched the numbers through the performance chart and said, “Yes, the airplane would be able to take off.” At which point the examiner asked, “Would you launch?” When I said, “No,” he nodded and commented, “Good; no matter what that handbook says, every year, that tree gets a little taller, that engine gets a little older, and the pilot gets a little heavier.”

Sounds like you had a wizened, seasoned DPE, and an even better instructor. Congrats!

In your November 2019 article, “Hold Everything,” consider correcting/changing the section under the subheading “Tips And Tricks” from “Holding is used by ATC to slow the flow of traffic when airport capacity outstrips demand” to “…when airport demand outstrips capacity.” Great article.

Some have written that using an N-number is not regulatory. It is true that it is not part of the FARs, as there does not seem to be anything in 14 CFR requiring using an N-number. However, the FCC does have regulations on this topic in 47 CFR Part 87.107 (FCC regulations for Station Identification). In general, it requires using the aircraft type plus the full N-number (without the “N”) or, optionally, type plus the last three digits of the N-number if responding to a ground-based station. There does not seem to be any exception for traffic in or approaching an airport traffic pattern.

I was appalled that a safety magazine would publish a position counter to the FAA because “we’re going to just have to disagree.” All because the author has a “personal preference.”

Personal preferences are fine around the FBO coffee bar because we expect them there, but not embedded inside of Aviation Safety. While Advisory Circulars do not carry the weight of the FARs, they are what the FAA expects us to do while complying with the FARs. For Mr. Hartmaier to bluntly just say I don’t care what the FAA wants, I’ll do it my way, is not befitting of your publication. While I agree we don’t want to be heads down in the pattern, a quick glance at my ADS-B In display confirms that the other aircraft is where I think he is. Since he only wants type, what does Mr. Hartmaier recommend we do if there are two C-172s in the pattern? A call sign and a quick glance at the display tells me am I seeing the aircraft making the call—or am I seeing a different C-172 and missing the one making the calls? This is why your call sign and the ADS-B Out data have to match or you are in violation.

If you are now publishing personal opinions as the way to fly airplanes, I can save my subscription fees and just buy more coffee at the FBO to listen to this sage advice.

FATE IS THE HUNTER

I read Rhett Dennerline’s comments on Captain Ross’s match lighting from Ernest K. Gann’s classic Fate Is The Hunter (Unicom, February 2021). Your readers should know that flames will not show which way is up. Ignoring the effect of any cockpit draft, the flame will respond to the inertial-gravity force much as our inner ears do.