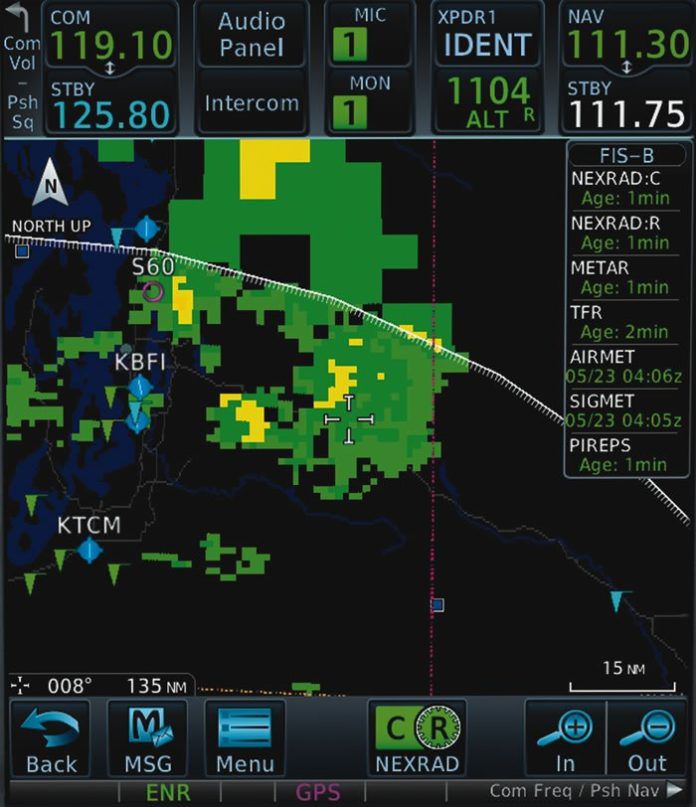 Your article on GPS approaches featuring WAAS-enhanced glidepath generation (Virtual Glideslopes) was very informative and clarified a number of points. There is also another approach which is not an official FAA approach and, as far as I know, is only available using Garmin WAAS navigators. It is a LNAV+V approach, and you will not see it on the minima section of an approach chart.

What was a little confusing is that in the table in the insert on page 21, LNAV is represented as having an Advisory Vertical Guidance. I dont believe that this is true in general. Thanks!

Thanks, Luca. The LNAV info came from the AIM, but well go back and double-check it for accuracy.

ADS-B Reviews
This is my first fan letter to an aviation magazine (or to any periodical, actually). Your November issue was full of very important information, a lot of it I realize that I either forgot, never knew or needed reinforcement. I especially was interested in the article in ditching (The Ditching Option) and Thomas Turners article on IFR departure preparations. The only one that made me quite sad is the article which discussed ADS-B upgrades as I just installed an Garmin GDL 88 ADS-B IN/OUT. Mr. Burnside made me feel quite foolish for my purchase, but I really love it.

In the article, TIS-B was described as not reliable, but on two occasions it has saved my butt when ATC failed to call out a plane on a collision course until I queried them about it. The terrain warnings and traffic depiction are not on my iPad or auxiliary device but right in front of me on my GTN 750, at which Im constantly looking. The cost wasnt cheap, but the peace of mind was worth it.
Jane Catterton
Via email

If you have a certified ADS-B OUT installation via the GDL 88, it may be configured to display all available TIS-B traffic. The incomplete data problem involves aircraft using ADS-B IN only, or those not equipped to receive TIS-B on both 978 UAT and 1090ES. Happily, the GDL 88 does that.

Water Landings
Thanks for your November 2014 article on ditching. Although I have never ditched a plane, my home is surrounded by water and I have made dozens of trips to the Bahamas in piston singles. I have researched and thought-out many scenarios.

Consider carrying small spare air or similar breathing systems when flying over water. These are lightweight, inexpensive and simple-to-use underwater breathing bottles. Its often reported that everyone survives the ditching but some drown before exiting the sinking plane. These spare air bottles provide a few minutes of breathable air that might make the difference. I wear one secured to my PFD belt.

The other comment relates to tethering a liferaft to a plane. Your article says never to do this. In contrast the U.S. Coast Guard training facility in Elizabeth City, N.C., recommends tethering to the plane so it does not sail off downwind or sink without inflating. They teach that to safely do this, we must use the right tether. They have found that if you remove the core strands from standard parachute cord, the remaining sheath material will have the proper strength to keep the raft close and inflate when the tether limit is reached, yet will break if the plane sinks and not drag the raft down. Finally, PLBs, as described in the article, are now pocket-sized, waterproof and cheap enough to be part of any pilot kit.

Thanks again for the great magazine!